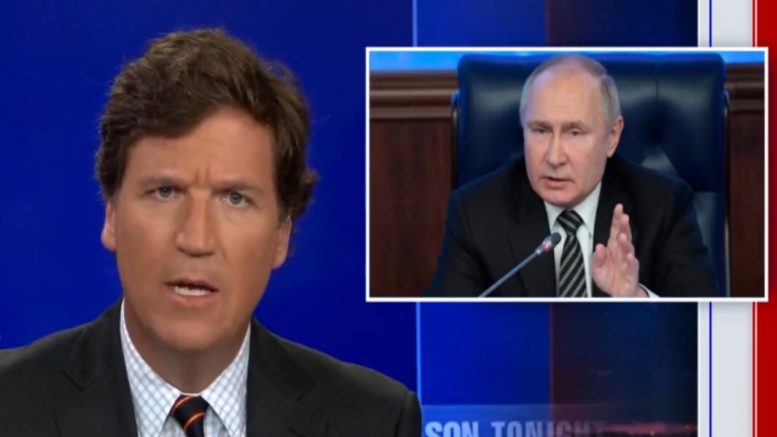 Fox News host Tucker Carlson on Tuesday wondered, “Why do Democrats want you to hate Putin?”

His question came after Putin announced Monday he would consider two Russia-backed separatist territories independent from Ukraine and sent troops there for “peacekeeping functions.”

“Since the day that Donald Trump became president, Democrats in Washington told you, you have a patriotic duty to hate Vladimir Putin,” Tucker Carlson said on his Fox News show “Tucker Carlson Tonight”. “It’s not a suggestion, it’s a mandate. Anything less than hatred for Putin is treason.”

“Many Americans have obeyed this directive,” he said. “They now dutifully hate Vladimir Putin. Maybe you’re one of them. Hating Putin has become the central purpose of America’s foreign policy. It’s the main thing that we talk about. Entire cable channels are now are devoted to it.”

“Very soon, that hatred of Vladimir Putin could bring the United States into a conflict into eastern Europe. Before that happens, it might be worth asking ourselves, since it is getting pretty serious, what is this really about?” Carlson asked.

“Why do I hate Putin so much? Has Putin ever called me a racist? Has he threatened to get me fired for disagreeing with him? Has he shipped every middle class job in my town to Russia? Did he manufacture a worldwide pandemic that wrecked my business and kept me indoors for two years?” he asked. Continued Below

“Is he teaching my children to embrace racial discrimination? Is he making fentanyl? Is he trying to snuff out Christianity? Does he eat dogs? These are fair questions, and the answer to all of them is no. Vladimir Putin didn’t do any of that,” Carlson noted

He also argued that Joe Biden is indebted to Ukrainian oligarchs and therefore, everyone must go along with his hatred of Putin.

The Fox News host tweeted his remarks and asked, “Why do Democrats want you to hate Putin?” Video Below

Why do Democrats want you to hate Putin? Has Putin shipped every middle class job in your town to Russia? Did he manufacture a worldwide pandemic that wrecked your business? Is he teaching your kids to embrace racial discrimination? Is he making fentanyl? Does he eat dogs? pic.twitter.com/xYEvapjbNT

(Related: Tucker: Let’s Say You’re President & Your Poll Numbers Make You Somewhat Less Popular than Chlamydia – What Do You Do?)