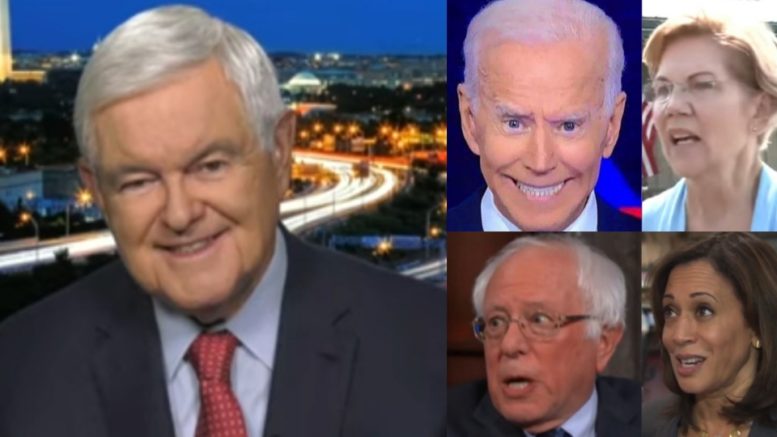 After President Trump,s Monday rally in North Carolina, Newt Gingrich weighed in on the successes of the Trump Presidency and indicater how the Democrats are “falling of a cliff.”

Newt said he believes almost half of Americans are blocking out the noise from Trump’s opposition as because they’re seeing President’s economic acheivements are working for the country, including the lowest tax cut in American history, and the lowest unemployment rate in American history for women, Latinos and blacks.

While, on the other hand, you have Democrats who are basically promising to “destroy” the economic success that President Trump has created.

So, in essence, there is a “contrast” where one side wants to “make America work”, while the other side consists of people who want to “cripple” America.

“Overall, the Democratic party is now falling off a cliff,” Newt said. “And just take the example of Elizabeth Warren promising that she’ll issue an Executive Order to ban all fracking in the United States.” Video Below

He mentioned how fracking is a technology that has enabled the United States to become the biggest energy producer in the world, has helped lower the cost of energy in America, and has “re-created the chemical industry” in the U.S.

“And [Warren] comes along — and I don’t think the Democrats realize — there is going to be county after county after county — eastern Ohio, western Pennsylvania — where there are a lot of folks who are making a living because of what’s happened with fracking,” Newt said. “And basically, she’s the guaranteed unemployment candidate.”

“I think, what you see is the Democrats running in to these kind of things as a group. It’s the most left-wing lemming group I’ve ever seen,” Newt declared. Video Below