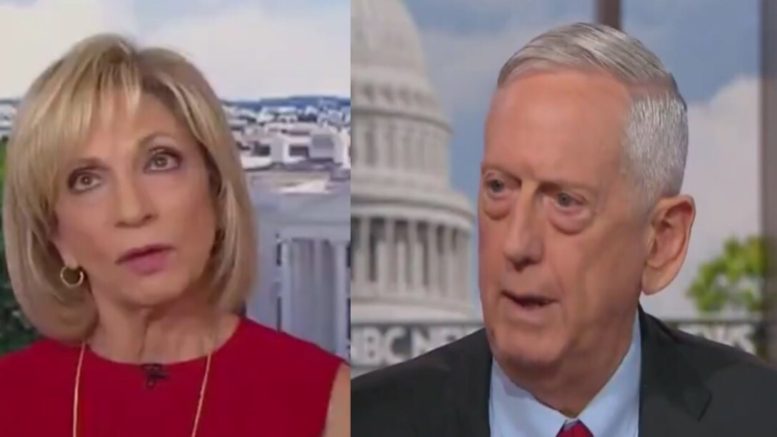 Former Secretary of Defense and commander of U.S. Central Command, Jim Mattis, spoke with MSNBC’s Andrea Mitchell after he resigned from the Trump administration, wrote a book, and went on air to talk about it.

If there’s one thing the liberal media likes to do, it’s to take those who were formerly with the Trump administration and try and bait them into bashing the White House. However, Mattis didn’t fall for it.

During the interview, host Andrea Mitchell was waiting with the chum bucket to bait Mattis into torching his former boss during her September 5 broadcast, especially on NATO. Mattis quickly ended the narrative in her line of questioning.

“Aren’t we at risk of making the same mistake if we withdraw from Afghanistan as the president has ordered by the end of what he says the first term?” she asked.

Mattis said the “strategy-free environment” in which he had operated for 15-20 years cut across party lines. (Continued Below)

Mitchell then asked if the American alliances were weaker now than when Mattis took office in 2017 and Mattis replied, “You know, Andrea, if you take a look at current events, you can always see the tensions because that’s what grabs your attention, the tensions in those alliances.”

“However, right now you see a NATO, I think we’re into the 4th straight year or 5th straight year, of the nations almost all of them increasing their defense budget. So I can say quantitively, NATO’s actually stronger today,” Mattis announced. [Emphasized].

“Now, there are political tensions. Those tensions have always been there in NATO where the American presidents– I remember all the way back to President Clinton when I became aware of this issue– President Clinton, President Bush, President Obama, all saying the same thing President Trump is. You’ve got to pay more,” he said. (Video Below)

“The way I carried the message to NATO, when I first went there as a secretary of defense was– I’ve sat in this room and have heard this message before. But the American people are saying they will not care more about your children’s future than you care,” Mattis continued.

“You’ve got to pay your fair share,” he reiterated leaving Mitchell speechless.

(Related: O’Reilly Forecasts The Fate Of Key MSM Players As Their Collusion Spin Was Proven Wrong)

‘2 Down, 8 To Go!’: Trump Takes Delight In GOP Rep. Kinzinger’s Announcement To Retire