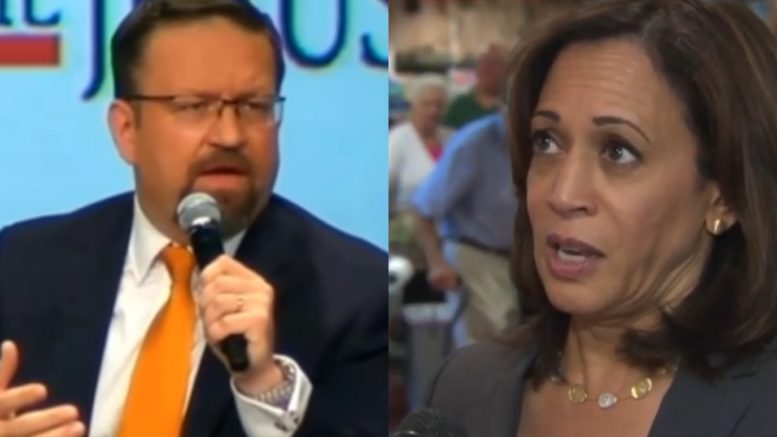 Sebastian Gorka is not buying Senator Kamala Harris’s claim that she didn’t hear one of her supporters call President Trump “mentally retarded” while he asked her a question at one of her recent campaign events.

Video tape, that can seen at the bottom of this article, appears to show Harris laugh and reply “Well said. Well said” when one of her supporters asked: “What are you going to do in the next one year to diminish the mentally retarded action of this guy?”

Kamala said in a tweet, “When my staff played the video from my town hall yesterday, it was upsetting. I didn’t hear the words the man used in that moment, but if I had I would’ve stopped and corrected him.”

“I’m sorry. That word and others like it aren’t acceptable. Ever,” she concluded.

Sebastian Gorka fired back at Senator Harris on Monday in response to her apology, and accused her of lying. See Below

Gorka said, “You’re a bald-faced liar. It’s on the videotape.”

“You verbally commended your supporter for using the phrase ‘retarded.’ Then you actually laughed,” he added.

“How were you a prosecutor? You lie with such alacrity, everyone imprisoned by you should have their cases reopened,” Gorka declared. See Below

In ending, here us video of the exchange that has been called into question involving Kamala and her supporter. We’ll let you be the judge on if she heard him or not.