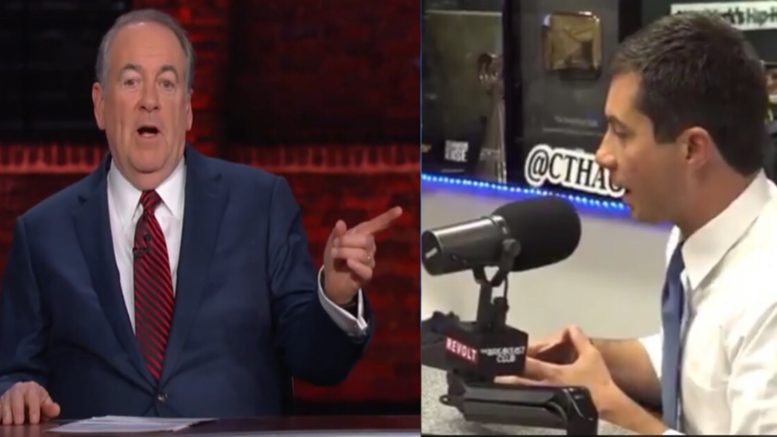 On Friday, South Bend, Indiana, Mayor and 2020 Democratic presidential candidate, Pete Buttigieg,  claimed during an interview on The Breakfast Club podcast that human “life begins at breath”, justifying abortion, even after a baby is born.

As a progressive pro-choice candidate, Buttigieg however, commonly mentions his Christian faith during the campaign trail and debates, so consequently, he used the Bible to legitimize his claim during the interview.

“There’s a lot of parts of the Bible that talk about how life begins with breath,” Buttigieg said while discussing abortion. “Even that is something that we can interpret differently.”

He confirmed that he was “pro-choice” and continued, “Most American’s can get on board with the idea of… I might draw the line here, you might draw the line there, but the most important thing is the person who should be drawing the line is the woman making the decision.”

Co-host of the podcast, Lenard Larry McKelvey, responded to Buttigieg with a rather disturbing response: “Absolutely. And I think if you’re a man who’s against abortion, you haven’t gotten the wrong woman pregnant. I’m just saying… I’ve had some slip up’s, and I’ve had a few,” McKelvey announced.

Former Arkansas Governor, Mike Huckabee, responded to Buttigieg’s claim after he appeared to justify abortion after birth. (Continued Below)

Huckabee included a video of Buttigieg’s remarks and suggested to Pete on Friday, “Hey, Mayor Pete: Instead of lecturing us on what it means to have ‘Christian values,’ ask yourself if it’s a Christian value to kill babies.”

(Related: GOP Figures React To Tuesday’s Democrat Presidential Debate: ‘Where Do They Find These People?’)

Hey, Mayor Pete: Instead of lecturing us on what it means to have "Christian values," ask yourself if it's a Christian value to kill babies. King Herod tried that. So did Pharaoh. Didn't end well. https://t.co/4d1Upckfrm

Known as the Massacre of the Innocents: Matthew 2:16-18: “Then Herod, when he saw that he was deceived by the wise men, was exceedingly angry; and he sent forth and put to death all the male children who were in Bethlehem and in all its districts, from two years old and under, according to the time which he had determined from the wise men.”

And when Herod knew that he had been mocked by the Magi, in a rage he sent murderers, saying to them: Slay the children from two years old and under. And Mary, having heard that the children were being killed, was afraid, and took the infant and swaddled Him, and put Him into an ox-stall, according to Wikipedia.

And Elizabeth, having heard that they were searching for John, took him and went up into the hill-country, and kept looking where to conceal him. And there was no place of concealment. And Elizabeth, groaning with a loud voice, says: O mountain of God, receive mother and child. And immediately the mountain was cleft and received her. And a light shone about them, for an angel of the Lord was with them, watching over them, per Wikipedia.

In a third attempt to weaken the Israelites and resolve Pharaoh’s irrational fear, the Egyptian king commands all his people (not just the Hebrew midwives) to kill all Hebrew baby boys by throwing them into the Nile River. Again, Pharaoh allows the Hebrew girls to live; he wrongly sees them as no threat. Again, ironies abound. It is a powerful cross-cultural and intergenerational alliance of three women – Moses’ Hebrew mother Jochebed (Exodus 2:1-3, 7-10; 6:20), Moses’ Hebrew sister Miriam (Exodus 2:4. 7-8; Numbers 26:59), and Pharaoh’s Egyptian daughter (Exodus 2:5-10) – who disobey Pharaoh and rescue the baby Moses.

Pharaoh tries to make the Nile River, Egypt’s main source of water and life, into an instrument of death. Yet the three women allies succeed in making the river a place of rescue and life. Moses’ mother, who as a slave received no wages, is paid a just wage for doing something she would gladly do for free–caring for her own baby (Exodus 2:9). The ironies of the story signal the fracturing of Pharaoh’s power and world view. God is at work bringing down the powerful from their thrones and lifting up the lowly (Luke 1:52).