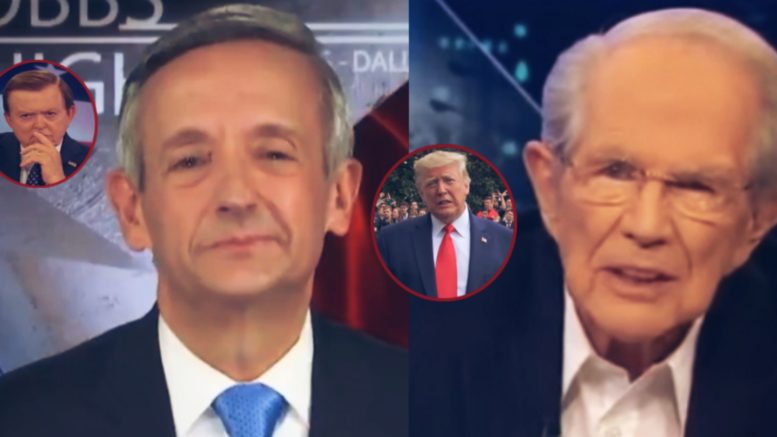 “The President of the United States is in danger of losing the mandate of heaven if he permits this to happen,” Robertson said during his October 7 broadcast of The 700 Club.

When pressed on the statement, Pastor Jeffress reacted by saying that Robertson is a friend of his but he disagrees with him on the notion that Trump could lose “the mandate of heaven” over withdrawing troops from Syria.

“The fact is, Lou, Evangelicals — some of them have different opinions with the President about Syria — I happen to agree with him on the decision that he made,” Pastor Jeffress said. “But I will guarantee you one thing: President Trump is not going to lose one Evangelical voter over Syria.”

“No Evangelical is going to vote for Joe Biden or Elizabeth Warren because of what’s happening in Syria,” he continued. “And look, Evangelicals may disagree with the President — some with him — but nobody should be surprised by the President’s decision! He campaigned on it. He won on the platform of ending these unending sectarian wars, and I’m glad he made the decision that he did ”

Dobbs brought up how Robertson also mentioned that removing troops from Syria could lead to another World War, and Pastor Jeffress shut that idea down by quoting Matthew 24:36, which states no one knows the time or hour of a great world conflict that Robertson could be referring to. Video Below

Pastor Jeffress then ended by giving an update on the current stance of Evangelical support for President Trump.

According to Jeffress, 99% of Evangelicals oppose the attempt by Democrats to remove President Trump from office and they know it’s a “farce” to “overturn” the 2016 election and “steal” the 2020 election.

“They know this is a spiritual battle, Lou, between good and evil, and Evangelicals are not going to abandon this President in this impeachment farce. They are with him one hundred percent,” he concluded. Video Below

Related Article: Pastor Jeffress Exhibits Why Evangelical Christians Are ‘Seething With Anger’ Towards Dems: They’re Attempting To ‘Steal This Presidency’