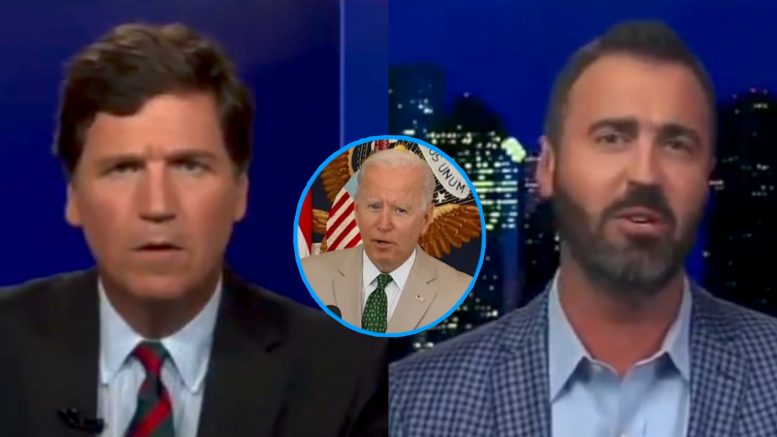 Political analyst Jesse Kelly claims far left politicians and media who helped “take down” Andrew Cuomo “don’t actually care about any” of the women who accused the New York governor of sexual misconduct.

In fact, the host of the Jesse Kelly Show thinks that if the left truly cared about “inappropriate touching,” they’d be “looking a little bit more” into the actions of Joe Biden.

These Communists who managed to slip enough knives into Cuomo to take him down don’t actually care about any of these women. Whether they were harassed or not, none of these women were cared for by Letitia James or anyone else.

If they cared about inappropriate touching by Democrats, they’d be looking a little bit more into Joe Biden who has been doing this on camera for a long time. And none of his victims are even old enough to ride the rides at Disney without an accompanying adult.

So don’t even tell me this people actually care. They don’t care. It’s all about power.

Related Article: Watch: Tucker LOL’s After Uncovering How Cuomo Appeared To Be ‘Sexually Attracted to His Emmy Statue’

Kelly went on to warn Americans to “be careful what you wish for” in regards to Cuomo resigning as the next generation of Radical Democrats are “much more worse than the current generation.”

“I dare I say it. In ten years, you’ll be begging for the days of Joe Biden and Nancy Pelosi and Andrew Cuomo,” Kelly declared declared. Video Below

. @JesseKellyDC says The younger generation is so radical that in 10 years people will be begging for the days of Nancy Pelosi, Joe Biden, and Andrew Cuomo. pic.twitter.com/qvKm3Tbn9K

Here is a corresponding clip from Mr. Kelly’s interview with Tucker:

Cuomo only killed 15,000 elderly people. It don’t matter as long as he’s out of office now and one of these radical retards can take his place. pic.twitter.com/z8bJwSgeop

Related Article: Kellyanne On Biden Touching Accusations: ‘If Anyone Types In ‘Creepy Uncle Joe Videos’, You Come Up With A Treasure Trove’

Watters: ‘Did Joe Biden Just Look the 82nd Airborne in the Eye & Tell Them They’re Going to War in Ukraine?’