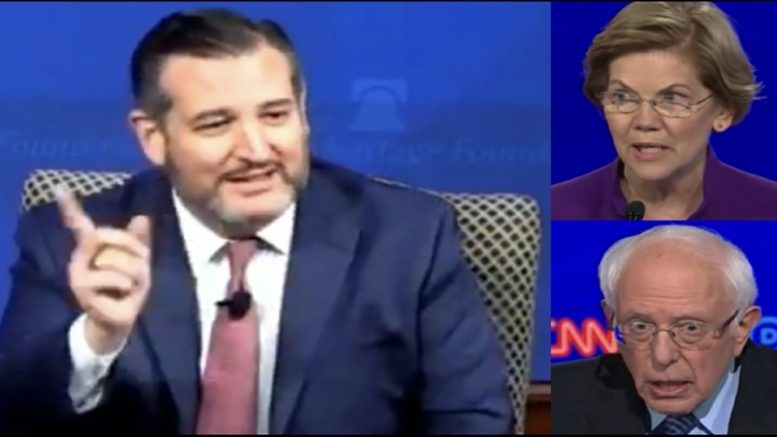 During a recent interview, Senator Ted Cruz challenged the media to put the same level of pressure on Democrat senators as they are with Republican senators in regards to the upcoming impeachment trial.

The challenge from Cruz came right before House Speaker Nancy Pelosi decided to transmit two articles of impeachment against President Trump after holding them from the Senate for nearly four weeks.

In a video uploaded by The Heritage Foundation, Cruz brought up a popular talking point that has surfaced in most major news outlets, which is “Are Republican senators gonna follow your oath?”

He continued, “Elizabeth Warren will be a…juror in this trial. Have any of you asked Elizabeth Warren, ‘Are you gonna follow your oath?'” Video Below

“Listen, the House managers could show up in grass skirts with hula hoops and yodel, amd Elizabeth Warren would vote to convict,” Cruz declared. “But yet no reporter is asking Elizabeth Warren or Bernie Sanders or any of the Democrats, ‘Are you gonna follow your oath?'”

“They’re all gonna vote to convict except maybe Joe Manchin, maybe a couple of others,” he proclaimed.

“But every Democrat running for office is going to vote to convict. Why? Because of partisan rage and they hate Donald Trump,” Cruz determined before the video cut off. See Below

For weeks I’ve challenged the media to ask @ewarren if as a candidate she could uphold her oath as a juror. It’s clear from last night’s debate that NONE of the 2020 candidates are impartial on impeachment bc they know they can’t beat Trump at ballot box. pic.twitter.com/Osr2SF0xUC

Nick Sandmann’s Legal Team Turns Up The Heat On Nathan Phillips, Disclose Intentions To Sue Him