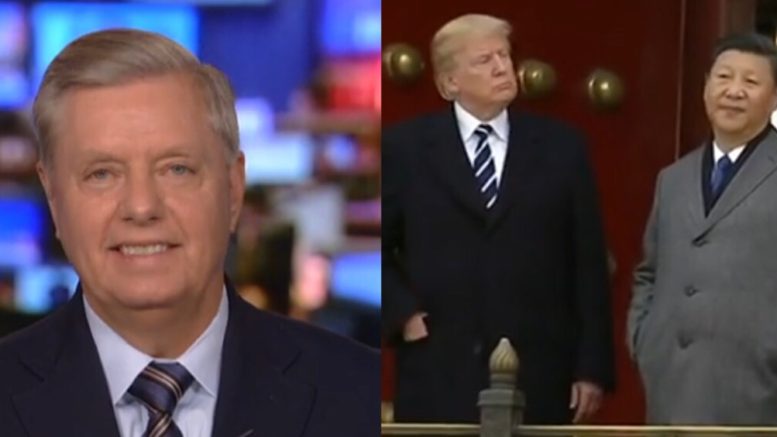 President Trump went on a Twitter spree Friday where he lashed out at China about trade China, tariffs, and tax. Further, he declared that on October 1st, goods and products from China will be taxed at a higher percentage to level the playing field.

Senate Judiciary Committee Chairman Lindsey Graham responded to the President’s announcement dealing with China during an interview with Martha MacCallum on Fox News, saying that Trump “has a good hand in the trade war with China and should ‘play it out.'”

President Trump tweeted on Friday, “The Economy is strong and good, whereas the rest of the world is not doing so well. Despite this, the Fake News Media, together with their Partner, the Democrat Party, are working overtime to convince people that we are in, or will soon be going into, a Recession. They are willing to lose their wealth, or a big part of it, just for the possibility of winning the Election. But it won’t work because I always find a way to win, especially for the people! The greatest political movement in the history of our Country will have another big win in 2020!”

“As usual, the Fed did NOTHING! It is incredible that they can “speak” without knowing or asking what I am doing, which will be announced shortly. We have a very strong dollar and a very weak Fed. I will work “brilliantly” with both, and the U.S. will do great. My only question is, who is our bigger enemy, Jay Powell or Chairman Xi?” President Trump asked.

He continued, “Our Country has lost, stupidly, Trillions of Dollars with China over many years. They have stolen our Intellectual Property at a rate of Hundreds of Billions of Dollars a year, & they want to continue. I won’t let that happen! We don’t need China and, frankly, would be far better off without them. The vast amounts of money made and stolen by China from the United States, year after year, for decades, will and must STOP.”

“Our great American companies are hereby ordered to immediately start looking for an alternative to China, including bringing your companies HOME and making your products in the USA. I will be responding to China’s Tariffs this afternoon. This is a GREAT opportunity for the United States. Also, I am ordering all carriers, including Fed Ex, Amazon, UPS and the Post Office, to SEARCH FOR & REFUSE all deliveries of Fentanyl from China (or anywhere else!). Fentanyl kills 100,000 Americans a year. President Xi said this would stop – it didn’t. Our Economy, because of our gains in the last 2 1/2 years, is MUCH larger than that of China. We will keep it that way!” the Commander in Chief declared. (Continued Below)

The President then tweeted, “For many years China (and many other countries) has been taking advantage of the United States on Trade, Intellectual Property Theft, and much more. Our Country has been losing HUNDREDS OF BILLIONS OF DOLLARS a year to China, with no end in sight Sadly, past Administrations have allowed China to get so far ahead of Fair and Balanced Trade that it has become a great burden to the American Taxpayer. As President, I can no longer allow this to happen!”

“Just spoke with President @JairBolsonaro of Brazil. Our future Trade prospects are very exciting and our relationship is strong, perhaps stronger than ever before. I told him if the United States can help with the Amazon Rainforest fires, we stand ready to assist!” Trump added. (Continued Below)

Senator Lindsey Graham responded to the President’s announcement about China and was asked what he thought about Trump’s tactics.

“I like it. The goal is to get China to stop cheating the United States out of market share, to play by the rules that everybody else in the world plays by. We almost had a deal several months ago, then they backed out of it,” Graham said. “When it comes to a trade war, we’ve got more bullets than they do. So, I think the President’s determined to get China to change their behavior and I’m 100% with him.”

Graham said of the market falling on Friday, “Don’t trust Wall Street to take care of China. If there were a deal tomorrow with China, even though it would be a terrible deal, the stock market would go up a 1000 points and 10 years from now, we would reap the consequences of that terrible deal. The stock market doesn’t impress me at all when it comes to China. What impresses me is the President’s determination to get them to change their behavior. They sell us a lot more than we buy from them. We can put tariffs on a lot more products coming out of China than they can put tariffs of products going into China from the United States.”

“Will we feel this as consumers? Yes. But pay now or pay later when it comes to China. Mr. President, keep it up. You’re the only guy in my life-time that has ever taken on China and you got a good hand here, play it out,” Graham expressed. “We’re not gonna relieve tariffs hoping they will do better. We’re gonna tie their behavior to what we do.” [Emphasized]

He added, “I think we can do this and this is what I would tell the America people: If Donald Trump doesn’t do it, who else will? And if you don’t do it, you’re gonna lose the world to China.” [Emphasized]. (Video Below)

(Related: Graham Responds To Tlaib & Omar’s Call For Congress To ‘Reconsider’ Aid To Israel: ‘I Have’)