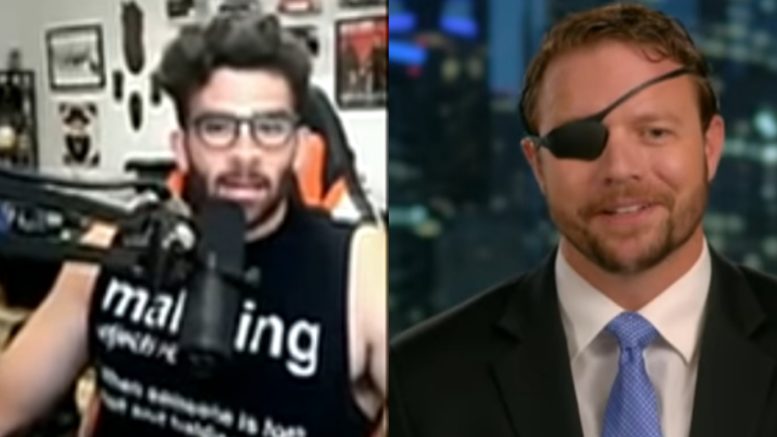 The Young Turks’ contributor, Hasan Piker, went on a twisted rant about Congressman Dan Crenshaw during a recent airing of his segement, where he mocked the military veteran for losing his eye while fighting oversees and suggested America “deserved” the 9/11 terror attacks.

Hasan said, “This guy has the understanding of foreign policy of like a twelve-year-old…What the f*** is wrong with this dude. Didn’t he go to war and lose his eye because some mujahidin, a brave f***in’ soldier f***ed his eye hole?”

Hasan has since tried to walk back his comments and defended them by saying it was “satire”, and offered Crenshaw to appear on his show after he acknowledged the Congressman “took it like a champ.”

In the meantime, however, Rep. Crenshaw responded to Hasan’s remarks while appearing on Laura Ingraham’s program on Fox News.

Crenshaw’s initial reaction was, “Wow, he was triggered, wasn’t he? I mean, that is a definition of a leftist getting triggered.” Video Below

“Doesn’t like what he’s hearing, he disagrees with it, he doesn’t understand foreign policies, he mentioned about something being twelve-years-old — yea, I have almost twelve years of experience actually deploying oversees,” Crenshaw continued. “So, maybe that’s what he meant when he said twelve year? I dunno.”

Crenshaw said Hasan is “the perfect example” of the “outrage culture” that exists right now, and it “reflects a very deep anti-Americanism” that currently exists in left-wing politics. Video Below

Kevin McCarthy Slams Joe Biden: “He Has Turned His Back On His Duties As Commander-In-Chief”