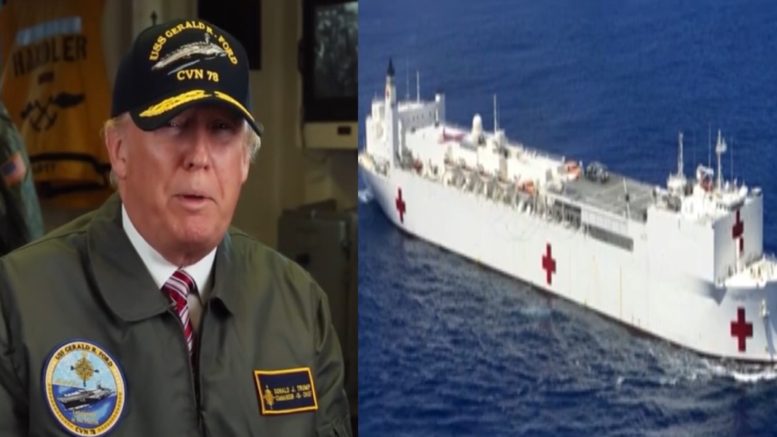 The Commander in Chief will travel to Norfolk, Virginia on Saturday to bid bon voyage to the Navy hospital ship. USNS Comfort is expected to dock in New York on Monday, ahead of schedule, after it had to undergo maintenance.

“I can now announce something that I think is incredible, what they’ve done in the Navy. Because the incredible Naval hospital ship, the USNS Comfort, which is incredible actually when you see it inside, will be underway to New York City on Saturday,” the President announced.

“So, it’s going to be leaving on Saturday, rather than three weeks from now. They did the maintenance quickly. It was going to be there for quite a while longer, another three or four weeks. It should be arriving, I told the governor 20 minutes ago, Governor Cuomo, that the ship will be arriving at New York harbor on Monday,” he said.

“I think I’m gonna go out and I’ll kiss it goodbye. I’ll go– it’s in Virginia, as you know. I’ll go and we’ll be waving together because I suspect the media will be following,” the president added. “There’s something very beautiful about it. It’s incredible.

The trip to Norfolk will be Trump’s first time leaving Washington, D.C., in a little more than two weeks. He has remained largely hunkered down in the White House as the virus has spread across the country, The Hill reported. (Continued Below)

The USNS Comfort will be loaded up with critical supplies and medical professionals as it sails to its destination in New York. The ship will be used to treat patients who are not infected with coronavirus to create additional hospital space for those patients in the city, as per The Hill.

Another Naval hospital ship, the USNS Mercy, has been dispatched to Los Angeles, in support of the nation’s COVID-19 response. Medical personnel reported to the Mercy on March 22, and the ship left Naval Station San Diego in California the following day, reported Defense.gov.

The Mercy left San Diego with more than 800 Navy medical personnel and support staff and 70 civil service mariners. The ship will serve as a referral hospital for non-COVID-19 patients currently admitted to shore-based hospitals. Navy personnel will provide a full spectrum of medical care, including general surgeries, critical care and general ward care for adults, as per Defense.gov (Video Below)

President Trump said he's "going to go out and kiss" the USNS Comfort goodbye on Saturday as it heads from Naval Station Norfolk in Virginia to New York City. https://t.co/sOA0Dx4bn4 pic.twitter.com/hm4vKqjG13

USNS Mercy departing the Naval Base in San Diego:

Check out this infographic to learn about the capabilities of #USNavy Hospital Ships, #USNSComfort and #USNSMercy being deployed to assist in COVID-19 response efforts. #CoronaVirus #COVID19

Getting ready to go make a difference.#USNSComfort (T-AH 20) takes on fuel & supplies in preparation to deploy in support of the nation’s #COVID19 response efforts. Comfort will serve as a referral hospital for non-COVID-19 patients currently at shore-based hospitals. pic.twitter.com/7YQpp44DnM

The #USNSComfort will sail well ahead of its originally scheduled departure time to answer America’s call to battle against the #COVID19 global pandemic here at home.

Fmr. President Trump Releases A Statement After Meeting With McCarthy At Mar-a-Lago