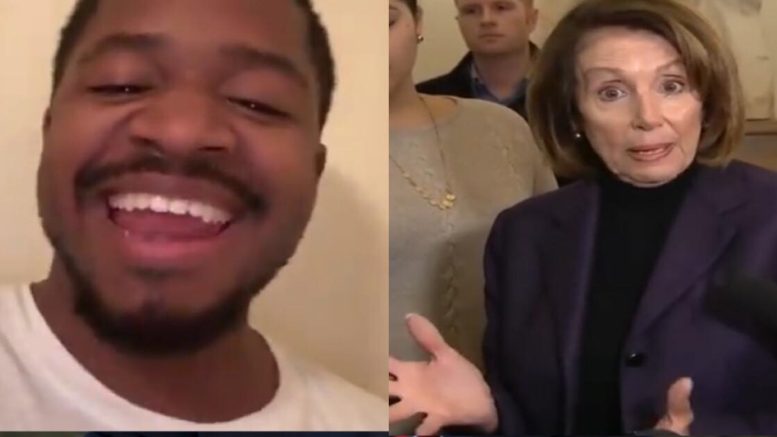 Terrence has a direct message for Nancy since she won’t be leaving the country and has to stay and work. (Video Below)

Speaker Nancy Pelosi’s plot to sabotage Trump’s State of the Union Address hilariously backfired when she was fact-checked by the Secret Service and the DHS.

Then, the Commander in Chief fired back at Pelosi and her colleagues when he canceled her foreign travel an hour before takeoff. He invited her to stay in DC and negotiate instead of letting 800,000 workers miss a second paycheck. That was a clear “checkmate” from the White House.

(Related Article: Trump Issues The Ultimate Payback To Pelosi After She Dis-Invites Him To SOTU Address; Denies Her Foreign Trip)

Terrence Williams began his video laughing and displayed a picture of President’s Trump letter to Speaker Nancy Pelosi. (Video Below)

Terrence asked as he burst into laughter, “Hey Nancy! Since you’re not doing nothing today, do you want to use my netflix password? You ain’t go nowhere to go.”

Then Terrence declared, “I love my President Trump! He’s a straight G. I like you Trump.” (Video Below)

Terrence asked Pelosi if she wanted to play games with the wall and proclaimed, “Guess what? Two can play at that game! You wanna play? Trump will play too.”

He concluded, “You thought you was petty, but Trump is King Petty! You done met your match!”

Terrence wrote on Twitter with his video, “A letter from Trump to Pelosi @SpeakerPelosi you are not going to Afghanistan on the government’s dime You want to play with the Wall well @realDonaldTrump can play too!”

Rep. Waters: “Even Though I Don’t Have The Facts To Prove It…I Believe [Russia] Wanted To Elect President Trump.”