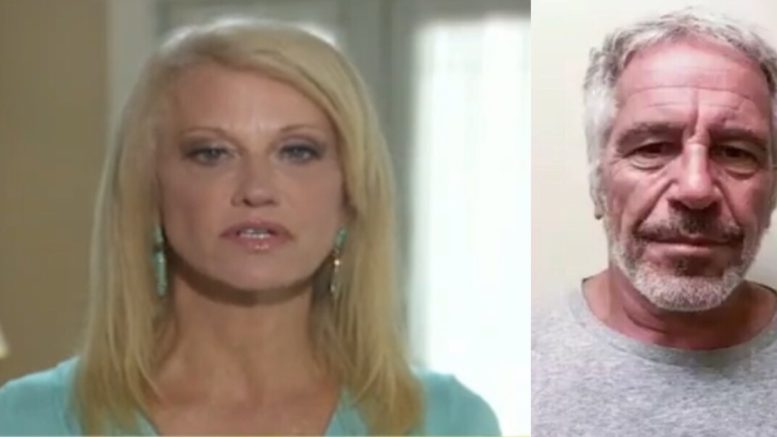 Kellyanne Conway said President Trump wants everything to be investigated pertaining to Jeffrey Epstein’s death when asked about the President retweeting Terrence Williams video. In his video, Terrence connected Epstein’s death to the Clintons.

Kellyanne responded when asked about President Trump retweeting Terrence’s video: “I think the President just wants everything to be investigated.” (Continued Below)

She continued, “There is some unsealed information implicating some people very high up. I’m not saying anything beyond that and I won’t. But I will say that there’s always this rush to say, ‘We need transparency, we need accountability,’ when it involves fictional accusations like collusion with Russia to swing an election.”

Kellyanne added, “Trying to connect the President to this monster from years ago, where they’re seen dancing in a video versus other people who were actively, I suppose, flying around with this monster on his island, which was known as pedophile Island, perhaps there’s a public interest in knowing more about that.”

She concluded, “But again, this is all speculative, and it’s not for me to go further than where the DOJ and FBI are right now, but you do hear different people asking questions, and they want to know who else was involved in Epstein’s crimes, or even just his activities. And I guess that will be revealed in time. (Continued Below)

Died of SUICIDE on 24/7 SUICIDE WATCH ? Yeah right! How does that happen#JefferyEpstein had information on Bill Clinton & now he’s dead

I see #TrumpBodyCount trending but we know who did this!