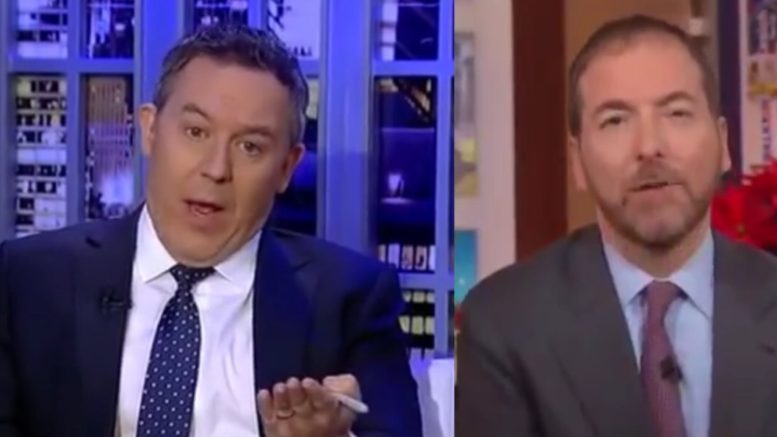 On Sunday, NBC host Chuck Todd read a letter on air from January 15, 2019, that claimed anyone who believes in “fairy tales” such as the story from the Bible of Noah’s ark, supports the president. Todd used the full hour on Sunday’s “Meet the Press” to discuss disinformation campaigns, which he compared to Trump propaganda.

As part of the special, he referenced the letter to the editor of the Lexington Herald-Leader by David Bowles, in which it suggested that Trump voters “want to be lied to”. Fox News’ Greg Gutfeld immediately responded by slamming Todd as “Dorian Gray without a painting”.

“I want to read you guys a letter to the editor that we found in the Lexington Herald-Leader. It was a fascinating attempt at trying to explain why some people support President Trump,” Chuck Todd said.

“Here’s what [David Bowles] says: ‘[W]hy do good people support Trump? It’s because people have been trained from childhood to believe in fairy tales. … This set their minds up to accept things that make them feel good. … The more fairy tales and lies he tells the better they feel. … Show me a person who believes in Noah’s ark and I will show you a Trump voter,'” Todd read in part.

Greg Gutfeld immediately responded on Twitter by slamming Chuck Todd as “Dorian Gray without a painting”. (Continued Below)

Jerry Dunleavy, a reporter at Washington Examiner, uploaded the clip of Chuck Todd reading part of the letter and tweeted: “No big deal, just @ChuckTodd attacking believing Jews, Christians, and Muslims (all three faiths contain the story of Noah’s Ark) because Drumpf.”

Related: Chuck Todd Gets Told He ‘Lied To The American People’, Mark Levin Reacts: “He’s One Of The Dumbest”)

Gutfeld responded to Dunleavy and the video slamming the NBC host: “It’s worse. He’s saying that anyone not sharing his beliefs clings to fairy tales. That exempts him from having to defend his own bias’s (sic) or assessing his own faults. He’s Dorian Gray without a mirror. Painting, whatever,” he wrote. (Continued Below)

Dorian Gray is the subject of a full-length portrait in oil by Basil Hallward, an artist impressed and infatuated by Dorian’s beauty; he believes that Dorian’s beauty is responsible for the new mood in his art as a painter. Through Basil, Dorian meets Lord Henry Wotton, and he soon is enthralled by the aristocrat’s hedonistic world view: that beauty and sensual fulfillment are the only things worth pursuing in life.

Newly understanding that his beauty will fade, Dorian expresses the desire to sell his soul, to ensure that the picture, rather than he, will age and fade. The wish is granted, and Dorian pursues a libertine life of varied amoral experiences while staying young and beautiful; all the while, his portrait ages, and records every sin.

Deciding that only full confession will absolve him of wrongdoing, Dorian decides to destroy the last vestige of his conscience and the only piece of evidence remaining of his crimes—the picture. In a rage, he takes the knife with which he murdered Basil Hallward and stabs the picture. The servants of the house awaken on hearing a cry from the locked room; on the street, a passerby who also heard the cry, calls the police.

On entering the locked room, the servants find an unknown old man stabbed in the heart, his figure withered and decrepit. The servants identify the disfigured corpse by the rings on its fingers, which belonged to Dorian Gray. Beside him, the portrait is now restored to its former appearance of beauty. (Video Below)

We leave you with Larry O’Connor, who also ripped Chuck Todd:

It's a year old, but it helps make Chuck Todd's and NBC News' argument that Trump voters and bible believers are ignorant, gullible, willing dupes.

This is supposed to be a smart, *news* program.#HowYouGotTrump

(Related: Ted Cruz Rips Chuck Todd: “The Press Needs To Stop Being Ridiculous & Acting Like They Work For Adam Schiff”)