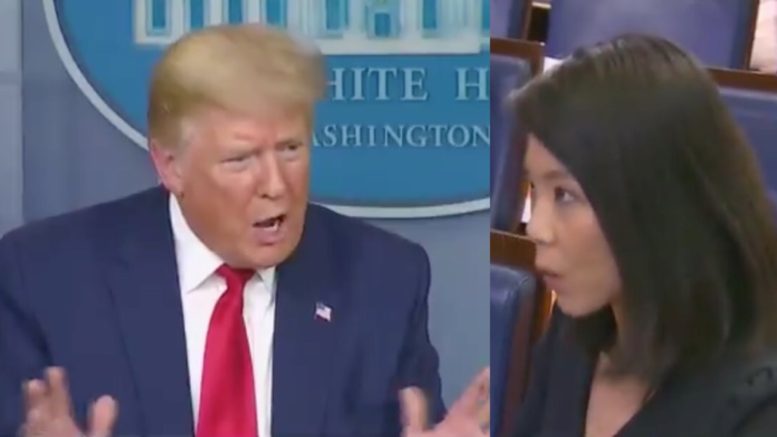 The president accused Jiang of asking a “gotcha” question in a “very nasty tone”.

“Yesterday Jared Kushner said, ‘The notion of the federal stockpile was it’s supposed to be our stockpile. It’s not supposed to be state’s stockpiles that they then use.’ What did he mean by our?” Weijia Jiang asked the president.

The president immediately fired back at Jiang calling it a “gotcha,” question, saying “our” means the United States of America.”

“But out of that, we oftentimes choose as an example: we have almost 10,000 ventilators and we are ready to rock with those ventilators. We’re gonna bring them to various areas of the country that need them. But when he says ‘our’, he’s talking about our country. He’s talking about the federal government,” he said. Continued Below

“It’s such a basic, simple question. And you try to make it sound so bad. You ought to be ashamed of yourself. You know it, you ought to be ashamed. It’s such a simple question. He said ‘our.’ And ‘our’ means for the country. And ‘our’ means for the states because the states are part of the country. Don’t make it sound bad,” the Commander in Chief recommended.

The CBS News White House correspondent tried to press the president again, but Trump told her: “You just asked your question in a very nasty tone”, and then moved on to the next reporter.

Last month, Weijia Jiang claimed on Twitter, without giving a name: “This morning a White House official referred to #Coronavirus as the ‘Kung-Flu’ to my face. Makes me wonder what they’re calling it behind my back.” Video Below

When pressed by Kellyanne Conway, counselor to the president, on who had made the claim against the White House staffer, Jiang refused to name who it was.