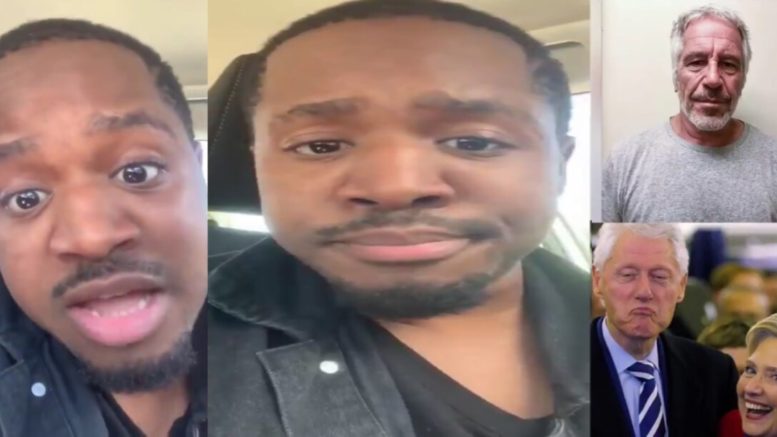 Terrence Williams took to Twitter and posted a video after the news broke reporting that Jeffery Epstein killed himself.

Terrence said in his video, “Shaking my head, I’m not surprised. I told ya’ll last month this was going to happen but didn’t nobody want to listen to me. But guess what? Next month, he’s dead. And you know what? All the liberals were calling me a conspiracy theorist.”

He went on to say that liberals told him that he “needed to banned from Twitter” for being a “conspiracy theorist.”

“And guess what? The man really ended up being dead,” Terrence continued. “And you know what? He had information on the Clintons and the man ended up dead.” (Continued Below)

“For some odd reason, people that information on the Clintons end up dead and they usually die from suicide,” Terrence said.

“Come on now. How do[es] everybody die from suicide [when] they got information on you? Terrence asked. “You know what? To be honest with you, I don’t want to know nothing about the Clintons.”

“I’m not gonna end up dead like everybody else. Now you know what? I’m not gonna say who killed that man because I could end up being dead. But the word around the streets is the Clintons did it. I don’t know though. I’m just another black man on Twitter. I don’t know nothing,” Terrence added.

“But somebody tell me what’s going on. How do you end up dead and you are a high profile case in prison? Come on now and you’re on suicide watch and you die of suicide in prison? Yeah, okay. Somebody is not doing their job or somebody got paid to not do their job so somebody can get knocked off so information don’t come out. But, I don’t know nothing. I’m just another black man on Twitter,” he concluded.

Terrence also wrote with his video: “Died of SUICIDE on 24/7 SUICIDE WATCH? Yeah right! How does that happen #JefferyEpstein had information on Bill Clinton & now he’s dead I see #TrumpBodyCount trending but we know who did this! RT if you’re not Surprised #EpsteinSuicide #ClintonBodyCount#ClintonCrimeFamily”

Died of SUICIDE on 24/7 SUICIDE WATCH ? Yeah right! How does that happen#JefferyEpstein had information on Bill Clinton & now he’s dead

I see #TrumpBodyCount trending but we know who did this! 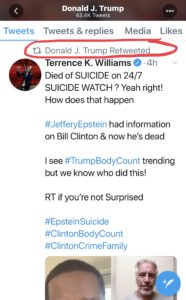