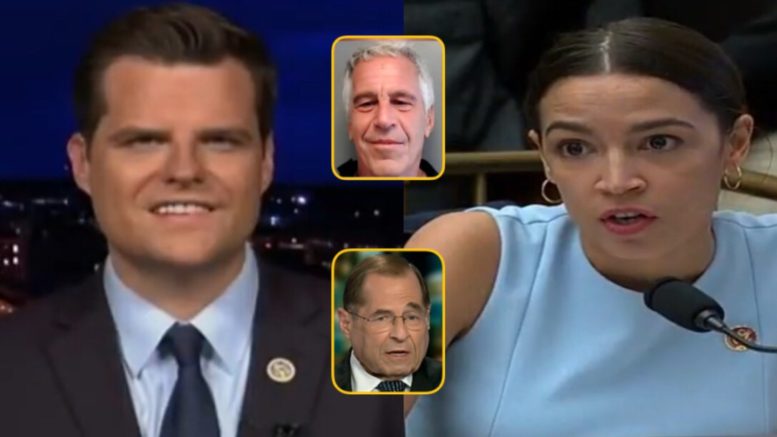 Rep. Alexandria Ocasio-Cortez (D-NY) took to Twitter on Saturday where she tweeted an article from The New York Times after accused sex trafficker Jeffery Epstein reportedly killed himself in his Manhattan jail cell Saturday.

From The New York Times:

Last month, after being denied bail on federal sex trafficking charges, Mr. Epstein was found unconscious in his jail cell with marks on his neck. Prison officials had been investigating the incident as a possible suicide attempt.

Mr. Epstein, who had been found injured on July 23, was placed on suicide watch and received a daily psychiatric evaluation, according to a person familiar with his detention. He was removed from suicide watch on July 29 and returned to the special housing unit, a segregated area of the prison with extra security, this person said.

The authorities did not immediately explain why he was taken off suicide watch. The F.B.I. said it was investigating, and Attorney General William P. Barr said in a statement that a special inquiry would be opened into what happened. “I was appalled to learn that Jeffrey Epstein was found dead early this morning from an apparent suicide while in federal custody,” Mr. Barr said. “Mr. Epstein’s death raises serious questions that must be answered. In addition to the F.B.I., the Inspector General, the Justice Department’s internal watchdog, will open an investigation into Mr. Epstein’s death.” (Continued Below)

Rep. Ocasio-Cortez tweeted a Times article about Epstein and wrote, “We need answers. Lots of them.”

Rep. Matt Gaetz responded to Cortez’s statement and agreed that a Judiciary investigation should be held by Chairman Jerry Nadler (D-NY), instead of wasting time on Kavanaugh records and the never-ending “Russia hoax.”

Gaetz said to Cortez, “I agree @AOC. Chairman @RepJerryNadler should prioritize a Judiciary investigation into how Jeffrey Epstein died in federal custody (in Nadler’s own neighborhood!) over the Kavanaugh confirmation (which already happened), and the Russia hoax (which never happened).” (Continued Below)

Chairman @RepJerryNadler should prioritize a Judiciary investigation into how Jeffrey Epstein died in federal custody (in Nadler’s own neighborhood!) over the Kavanaugh confirmation (which already happened), and the Russia hoax (which never happened).