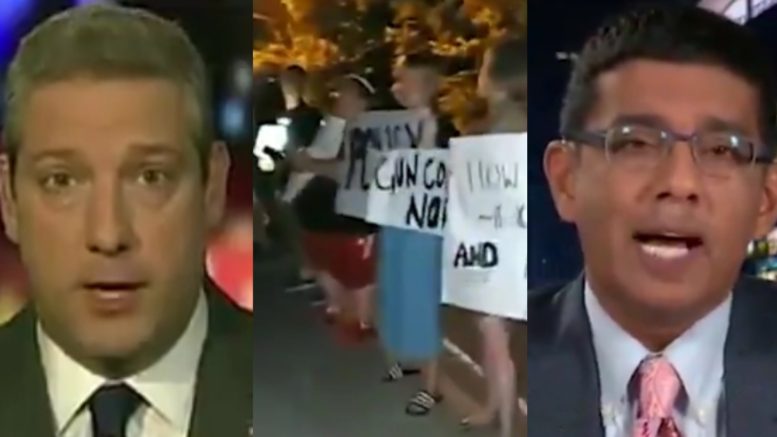 Democrat Representative and 2020 Presidential candidate, Tim Ryan, is a man on a mission to try sending a message to Senate Majority Leader Mitch McConnell.

Since he already knows that President Trump will give him a fight he has no chance at, Ryan is target Mitch McConnell, who has already underwent protests at his home over the week.

In an interview with CNN, Ryan revealed his plans of “leading a caravan” of protesters that he says will start in Youngstown, OH, and pick up people in Akron, Columbus, Dayton and Cincinnatti before eventually ending up at McConnell’s hometown of Louisville, KY.

Ryan said, “We’re gonna make sure that Mitch McConnell knows that there are two pieces of legislation sitting on his desk that he needs to bring up for a vote to actually get some action.”

Dinesh D’Souza found Ryan’s plan to be quite ridiculous and sounded off to Laura Ingraham regarding the matter.

D’Souza agreed with Laura that things look like they could be get dangerous, but stated how “pathetic” Democrats are making themselves look. Video Below

Dinesh compared President Trump to “Muhammad Ali” and said he “challenges them into the ring”, but “they’re scared of getting into the fight” so they pick on McConnell instead.

“So, I see this as a pathetic effort, ultimately now to move away from Trump and pick on more vulnerable people like McConnell, thinking that maybe the left can do a better job of terrorizing them, because they sure as heck can’t terrorize Trump,” Dinesh concluded. Video Below

President @realDonaldTrump is like Muhammad Ali, taunting the Democratic weenies to get into the ring.

But they're scared of him, so they go after @SenateMajLdr instead.

Trump Fires Back After Former AG Barr Calls Election Fraud Claims ‘BS’: “A Disappointment in Every Sense of the Word”

WATCH: Canadian Farmers Appear to Unite with Truckers & ‘Lock Down’ Toronto in Protest of Mandates