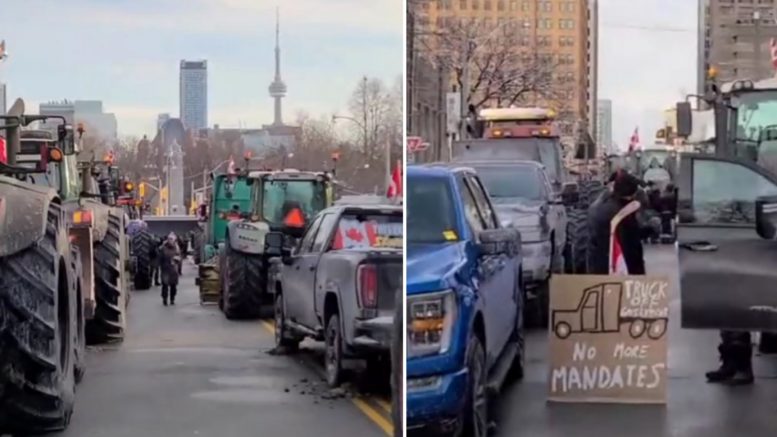 Canadian farmers apparantly have joined forces with truckers to send a message to the country’s leadership over mandates.

A video surfaced on social media on Friday that appears to show a plethora of tractors and other agricultural equipment parked in the middle of downtown Toronto, with owners of the equipment standing on the street to protest.

Related Article: Report: U.S. Truckers Preparing to Form a Convoy That Will Travel From CA to Washington D.C.

One of the signs held by a demonstrator reads, “Truck Off Goverment, No More Mandates.”

“Downtown Toronto is now being locked down by farmers,” a Twitter user captioned the video of the protest. “The workers of the world are uniting – just not in the way the globalists hoped.”

Downtown Toronto is now being locked down by farmers. The workers of the world are uniting – just not in the way the globalists hoped. pic.twitter.com/WFyvyLOmb7

As reported by Fox News, “The Freedom Convoy of truckers left Vancouver for Ottawa on Jan. 23 to protest the federal government’s vaccine mandates for cross-border truckers and is calling for an end to coronavirus restrictions. The convoy reached Ottawa [last] weekend and police estimated between 5,000 to 18,000 people were on the streets Saturday. The number is estimated to have come down to the hundreds of protesters as of Wednesday.”