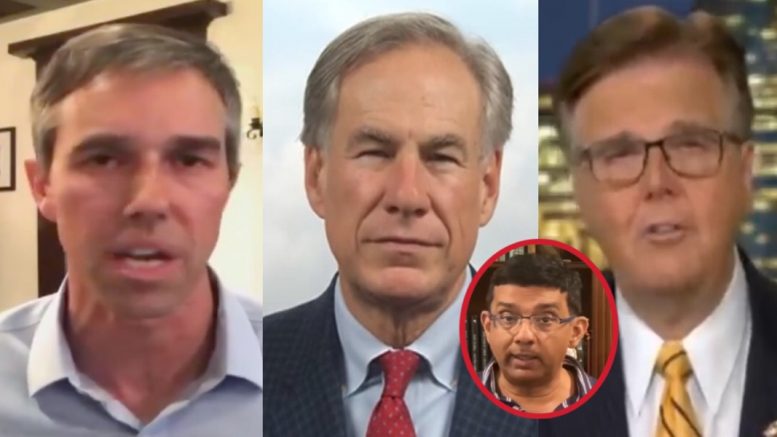 Dinesh D’Souza responded by suggesting that O’Rourke’s “steak of lunacy” was “artfully concealed by the media during the Cruz race”, referring to the 2018 Senate midterms, to which Senator Ted Cruz defeated O’Rourke by a margin of 50.9 to 48.3 percent.

“This is one of the most craven, callous failures of leadership that I’ve ever witnessed in my life,” O’Rourke claimed.

O’Rourke’s comments come amid a surge of coronavirus cases in the Lone Star State.

Hidalgo County Judge Richard Cortez issued an emergency order on Monday that mandated people shelter in their residences, restricting travel and limiting gatherings. The order also established a countywide curfew from 10 p.m. to 5 a.m., with exceptions for medical emergencies or those working in essential services. Furthermore, the order encouraged and recommended that all commercial businesses “cease their activities, unless they are essential, like activities related to health, safety or necessary supplies,” as reported by The Hill.

Governor Greg Abbott’s spokesman John Wittman, however, told The Texas Tribune that the order has “no enforcement mechanism.” Under the governor’s statewide orders, local governments cannot enforce their own stay-at-home orders, rendering Cortez’s policy a recommendation. Continued Below

“I am asking for all of us to come together and fight this battle as one,” Cortez said in a statement. “This action will help us do the right thing to save and protect each other from this deadly disease by sheltering at home.”

Meanwhile, O’Rourke alleged that Governor Abbott is making a choice, to “allow people to die when he could choose to allow county judges to save their lives.”

He also suggested that Governor Abbott’s decision making is based, in part, around fending off potential competitors in the 2022 gubernatorial Republican primary, including a challenge from his lieutenant governor. Continued Below

O’Rourke referenced Lt. Gov. Patrick’s remarks in April that called for the reopening of his state in which he said there are “more important things than living.”

“In other words, let’s get on with the dying,” O’Rourke said. “Knowing full well that it will be those front-line workers making $7.25 an hour, which is the minimum wage in Texas. It will be African Americans, it will be Latinos, and Mexican Americans who will be doing the dying right here in Texas.”

“This is a death cult. The Texas GOP. Only they want you to do the dying,” he added. “And that is exactly what is happening in Texas right now.” Video Below

.@BetoORourke on Covid: "This is a death cult, the Texas GOP. Only they want you to do the dying. And that’s exactly what is happening in Texas right now." pic.twitter.com/0NlTcSjupz

Dinesh D’Souza responded to O’Rourke’s comments, writing: “This steak of lunacy that is part of Beto’s makeup was artfully concealed by the media during the Cruz race. Now our Texas madman is on his own, raving and ranting for anyone who has time to listen”.

This steak of lunacy that is part of Beto’s makeup was artfully concealed by the media during the Cruz race. Now our Texas madman is on his own, raving and ranting for anyone who has time to listen https://t.co/dxUznkCScV

(Related: Karl Rove Rips Beto O’Rourke’s ‘Cheap Shot’ At Gov. Abbott: “I Thought He Might Be Tweeting Out His Own Personal Motto”)