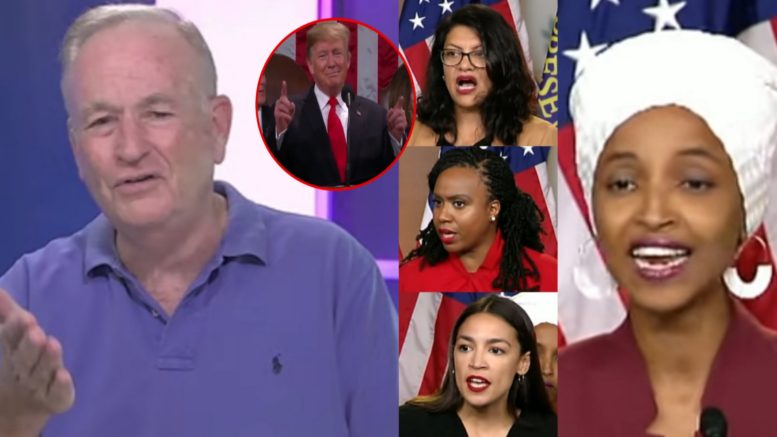 In a recent video, Bill O’Reilly weighed in on the current drama surrounding President Trump and “The Squad” of four Democrat Congresswomen that have been gripping the headlines over the past week.

O’Reilly summed up that what we are seeing is a “political power play” on both sides of the aisle for the 2020 election.

He said that the four Congresswomen will never admit it, but the core of their radical ideology centers around the belief that “America is an unfair country — a place where white men abuse everyone else.”

O’Reilly went on to say that the Democrat Party fears these women, especially Alexandria Ocasio-Cortez, because they’re media darlings and command attention on an extremist ideology that Democrat leadership knows is not popular among most Americans. Nancy Pelosi and other Democrat leaders don’t want to promote “America haters.”

According to O’Reilly, Trump seized upon the Democratic struggle, since he knows most Americans are not America-hating radicals. So, he sarcastically suggested these four women to “go back” to where their ancestors are from and fix up those broken nations before radically trying to change the American government .

In essence, Trump is virtually using the situation as “a big fundraiser” for the 2020 election. O’Reilly cited how Trump’s campaign took in $100 million dollars in the second quarter. Trump’s decision to attack the four Congresswomen will only help propel more money in his campaign chest. Video Below

“Believe me when I tell you, that Donald Trump believes that his tweet attacks on these four radical Congresswomen will help him get re-elected and raise a lot of money for him,” O’Reilly declared.

Related Article: Mike Huckabee Turns The Tables On The Squad Exposing Their Guilt: ‘When [You] Throw A Rock Over A Fence, The Hit Dog Hollers’

And this move by Trump only leaves Democrats in a position to do what they’ve always done and launch a campaign where they try to persuade the American public that he is a racist. Video Below