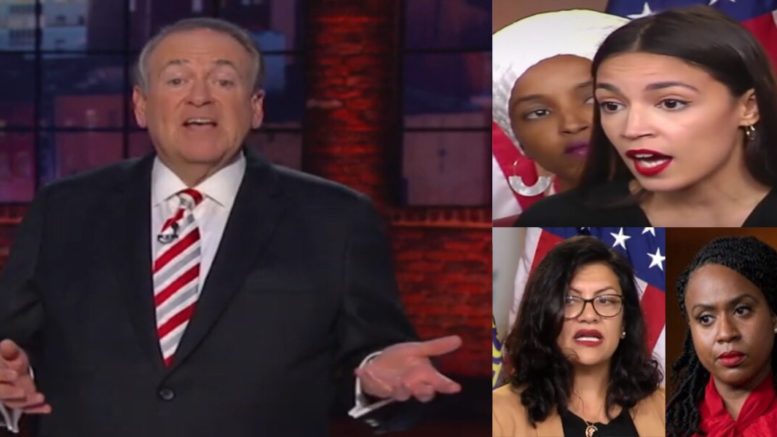 Former Arkansas Governor, Mike Huckabee, chimed in on the “squad drama” that has dominated the news cycle overwhelmingly the last few days.

Huckabee took to Twitter to give his thoughts on the four Democratic freshmen Congresswomen along with GOP members, who openly spoke out against the President.

Without naming names, the President wrote on Twitter Sunday, “So interesting to see ‘Progressive’ Democrat Congresswomen, who originally came from countries whose governments are a complete and total catastrophe, the worst, most corrupt and inept anywhere in the world (if they even have a functioning government at all), now loudly and viciously telling the people of the United States, the greatest and most powerful Nation on earth, how our government is to be run.”

Then, he suggested, “Why don’t they go back and help fix the totally broken and crime infested places from which they came. Then come back and show us how it is done. These places need your help badly, you can’t leave fast enough. I’m sure that Nancy Pelosi would be very happy to quickly work out free travel arrangements!”

Mike Huckabee responded to the President’s tweets turning the tables on the “squad” where he exposed the freshmen Democrat’s guilt. (Continued Below)

The former Arkansas Governor took to Twitter on Tuesday explaining how the Congresswomen “jumped up” accepting the fact that they are the anti-American representatives in Congress.

“Let’s review: @realDonaldTrump calls out UNNAMED members of Congress for hateful, anti-American & anti-semitic rantings. 4 members jump up & say ‘It was ME!’ Huckabee declared.

He added, “In [the] South we say, ‘When U throw a rock over a fence, the hit dog hollers.’ So hoss, these 4 admitted they did it.” (Continued Below)

It is also worth noting that some members of the Republican party frowned upon the President’s tweets. Huckabee also dished out some well-deserved advice to them.

He suggested, “When GOP members of Congress want to disagree with the team captain @realDonaldTrump they need to do it in the “locker room” and not on the field!”

Here is yet, another example as to why the President is correct about members in Congress, who seemingly “don’t respect our country.”

Rep. Ayanna Pressley on calling Trump the “occupant” of the White House: “He is only occupying the space. He does not embody the principles, the responsibility, the grace, the integrity of a true president … I’m not dishonoring the office. He does every day.”

(Related: Huckabee Slams Maddow Upon Hearing Of Her $7 Mil Salary: ‘Why Is Delivering Garbage Worth More Than Hauling It Away’)