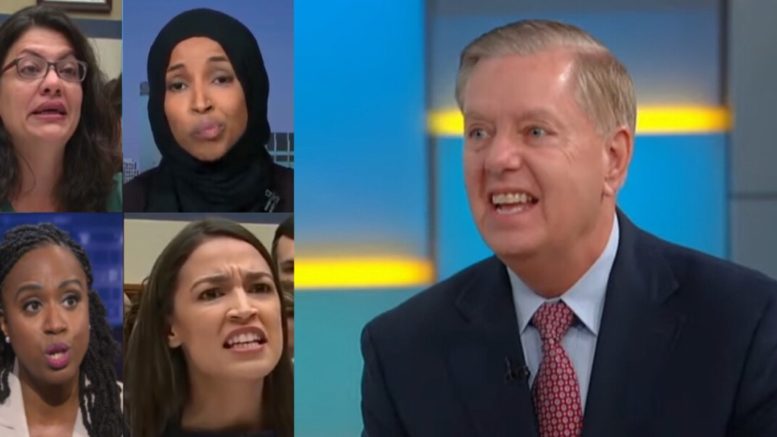 Graham pushed back specifically at Alexandria Ocasio-Cortez (D-NY) and Ilhan Omar (D-MN), accusing Omar of being “anti-Semitic,” and calling the congresswomen a “bunch of communists.”

Senator Lindsey Graham said, “We all know AOC and this crowd are a bunch of communists. They hate Israel, they hate our own country. They’re calling the guards along our border, the Border Patrol agents, ‘concentration camp guards,’” Graham said. “They accuse people who support Israel of ‘doing it for the Benjamins’. They’re anti-Semitic, they’re anti-America.”

Graham recommends the Commander in Chief “aim higher” and that “we don’t need to know about them personally,” but said President Trump should focus on the group’s unpopular policy ideas.

Asked if he thought the President’s tweets were negative, Graham responded, “I think they’re America citizens, who are duly elected, that are running on an agenda that is disgusting– that the American people will reject– talk about what it means for America to have free healthcare for illegal immigrants and no criminalization of them coming into the country. See how that works for controlling immigration.”

“Their ideas– they’re anti-Semitic. They talk about the Israeli State if they’re a bunch of thugs, not victims of the entire region. They wanted to impeach Trump on day one. They’re socialists, they’re anti-Semitic. They stand for all the things that most Americans don’t agree with,” he expressed. “Make them the face of the future of the Democratic party; you will destroy the Democratic party.” (Video Below)

Sen. Graham’s remarks start at 5:40 into the video: