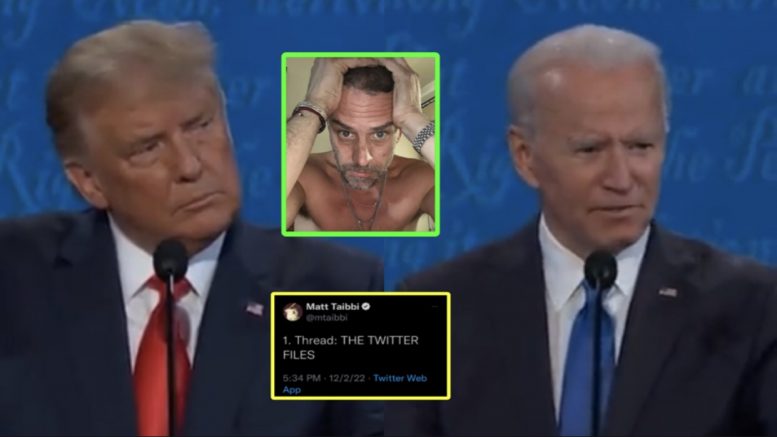 During the 2020 presidential campaign, career politician Joe Biden blatantly lied to the American people when he called reports at the time — regarding his son’s laptop — a “Russian plant” and “garbage”.

Biden relied on a letter, signed by 50 former intelligence officials, to justify his alleged innocence over damning information in the now-verified Hunter Biden laptop.

Joe Biden told voters during a 2020 presidential debate regarding information from Hunter Biden’s laptop: “50 former national folks … said that what [Donald Trump] is accusing me of is a Russian plant. They have said this has all the characteristics … What [Trump] is saying is a bunch of garbage.

Biden lying his ass off to the American people during a 2020 debate, calling the Hunter Biden laptop a “Russian plant.” pic.twitter.com/qnWh7cQXPL

During the 2020 campaign, 45th President Donald Trump called Joe Biden a “criminal”. “He is a criminal,” Trump told White House correspondent Jeff Mason of Reuters. “He got caught. Read his laptop. And you know who who’s a criminal? You’re a criminal for not reporting it.”

The president of the United States says that a reporter asking him a question is "a criminal for not reporting" on the Hunter Biden smear story. pic.twitter.com/g7gVI4K2YB

As reported by Fox News regarding Hunter Biden’s laptop:

One email, dated May 13, 2017, and obtained by Fox News, includes a discussion of “remuneration packages” for six people in a business deal with a Chinese energy firm. The email appeared to identify Hunter Biden as “Chair / Vice Chair depending on agreement with CEFC,” in an apparent reference to now-bankrupt CEFC China Energy Co.

The email includes a note that “Hunter has some office expectations he will elaborate.” A proposed equity split references “20” for “H” and “10 held by H for the big guy?” with no further details. Fox News spoke to one of the people who was copied on the email, who confirmed its authenticity.

Sources told Fox News that “the big guy” is a reference to the former vice president.

in the Presidential debates. New letters are another indicator of direction GOP house investigations.https://t.co/aYcY70zIxL

Meanwhile, House Leader Kevin McCarthy (R-CA) vows to “get answers for the American people” about the laptop in January, when Nancy Pelosi hands over the gavel.

We're learning in real-time how Twitter colluded to silence the truth about Hunter Biden's laptop just days before the 2020 presidential election.⁰
In 32 days, the new House Republican majority will get answers for the American people and the accountability they deserve.

Related: Rep. Comer: Every Employee at Twitter Involved in Suppressing Hunter Biden Laptop Story will Have an Opportunity to Explain Their Actions