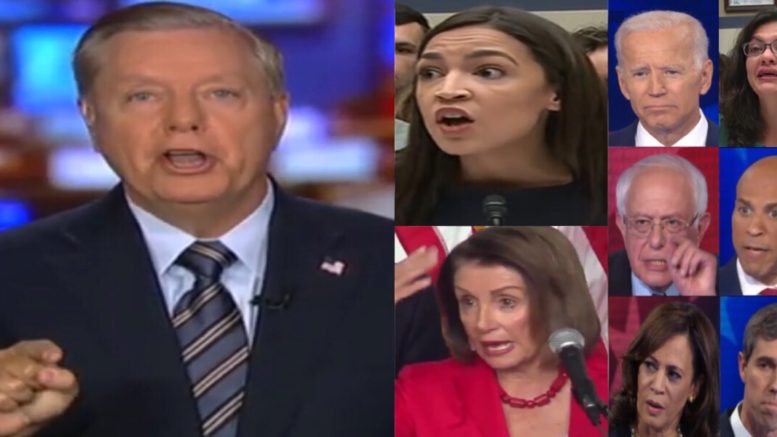 He also discussed his trip to the border with the Vice President where they visited a tempory detention center in Texas on Friday.

“Not only are [Democrats] trying to stop people from being deported who’ve had their day in court and lost… by the way Obama deported 3 million people but the ICE raids today are focused on criminals who have gone to court and lost their case. Democrats are also advocating decriminalizing entry into the United States and providing free healthcare to illegal immigrants once they get here,” Sen. Graham said.

“They’re becoming the party of open borders and free healthcare and you can’t deport somebody who lost their court case. This is insane, it’s gonna blow up in their face and it’s really doing damage to our country,” he added.

Sen. Graham talked about his trip in Texas where he visited a detention center and said that he “saw a system completely overwhelmed for no good reason.” He noted that the laws are set up currently as: “If you can bring a small child to America, coming from Central America, we can only hold the child for 20 days, then we let the entire family go because we don’t want to separate families. We can’t process a case in 20 days.”

“What did I see? 52,000 people have been released into the interior of the United States from this one border patrol area alone. What did I see? A system about to break. I saw brave men and women who are doing an incredible job under difficult circumstances and I’m gonna introduce a resolution next week praising them– the men and women of the border patrol and their allies. I saw 900 illegal immigrants that were captured for coming in our country illegally, housed in detention facilities that was meant for 385, so they had to put a tent in the back. What I saw is a bunch of people who have been here before, who broke the law before and we’re not gonna let them go. I don’t care if they have to stay in these facilities for 400 days, we’re not gonna let those men go that I saw, it would be dangerous,” he declared. [Emphasized.] (Continued Below)

Sen. Graham also said different nations are sending people here illegally as well. “We caught people from Iran, Syria, every place in the world, they’re coming through our border,” he said including Bangladesh and the Middle East.

However, Graham had a stern message to Rep. Alexandria Ocasio-Cortez and the rest of the Democrats who are complaining about the criminals who broke the law and being detained “behind cages”.

“All of them broke the law, many of them have done it before and we’re not going to let them go. This is not a concentration camp that I saw, it is a facility overwhelmed. I’m willing to buy beds for these people so they’ll have a better place to get a nights sleep, but I’m not gonna let them go! And AOC and Democrats are trying to break the system so that we let these people go. They came here illegally. 700+ adult males with criminal backgrounds, by many of them, repeat offenders who’ve been caught before. We’re not gonna let them go and I don’t care if we have to build tents from Texas to Oklahoma, we’re not gonna let these people go. They’re gonna have their day in court and we’re gonna send them back!” Sen. Graham warned. (Continued Below)

In April, Sen. Graham announced that was drafting new legislation to fix the immigration laws focused on a package that will change the asylum laws. The three main issues that Graham said he was going to try and fix include: The Flores Decision, Trafficking Victims Protection Reauthorization Act, (TVPRA), and the asylum standards.

Asked when he was going to bring the Bill to the floor, Graham said, “I can tell you after this visit, this Bill is more necessary than ever. So what does the Bill do? It says you can’t apply for asylum in the United States if you’re from Central America. We’re being overwhelmed. I’m saying you gotta apply for asylum in your own country or Mexico.”

He continued, “I’m also saying, we can’t process a minor claim in 20 days, give us more time to process minor claims. 30% of people with small children are fake families! The world is out in Central America [that] you bring a small child to the United States, you’re home free. I want to change that narrative. My bill will stop 90% of this. We’re gonna vote before the August recess. I am willing to spend money to help Central America; Democrats have mentioned that. We gotta change our laws or this never stops. What I’m not gonna do is keep the system intact because it’s broken.”

“This will never stop until we change our laws. Once they hear that you can no longer get released in America by bringing a small child, they’ll stop coming. Once they hear you can’t apply for asylum in America, you have to do it in your home country, they stop paying the smugglers. My Bill puts the smugglers out of business,” Graham said. “This journey they are making is dangerous. The smugglers and coyotes are making billions of dollars transporting these people and I gotta change the narrative, America needs to change the narrative.”

“To my Democratic friends: we’re gonna vote on my Bill. I’ll meet you half way. We’ll do things for Central America, but we’re not gonna turn our back on this problem any longer,” he added. (Video Below)

(Related: Sanders Responds After Trump Increases Pressure On Sanctuary Cities: ‘It’s A Sad Day When Mexico Is Willing To Do More Than Dems’)