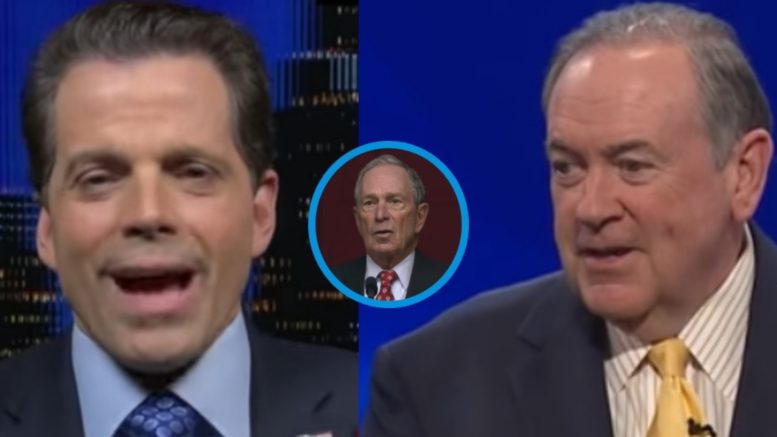 Former New York Mayor Michael Bloomberg sent the world of politics into a frenzy on Friday, after his aides filed paperwork for him to run in Alabama’s Democratic presidential primary.

The move has now led to widespread speculation on whether or not he will take the full plunge in the 2020 race.

Former Trump Administration official turned foe, Anthony Scaramucci, views Bloomberg’s potential run as the “No. 1 threat” to President Trump as he feels the President is “intimidated” by the former mayor.

“I think the president would be very intimidated by a guy like Michael Bloomberg,” Scaramucci said while being interviewed by CNN’s Chris Cuomo. “He’s a New Yorker. He could stand the onslaught of the president’s bullying. He’s worth probably five to eight times the president’s net worth. He could spend a fortune defending himself and getting ads up in all areas of the country.”

“And if Mike Bloomberg got the nomination, it’s very clear to me that he would beat Trump,” he added.

“Judge Judy” Sheindlin struck the same tone as Scaramucci when she weighed in on Bloomberg’s potential run. See Below

While facing Bill Maher, Sheindlin suggested Bloomberg could unite the “fractured American family” as she stated, “The parties have become so angry with each other that nothing is happening. The American public is paying for a very expensive system — an executive, a judicial branch of government, and Congress — and we’re not getting anything done.”

“Amazed that NYorkers like Judge Judy and the Mooch really believe an elitist, globalist pro-abortion, gun-grabbing, soda-stealing, GOP/DEM/IND/DEM again Bloomberg can beat @realDonaldTrump in 2020,” Huckabee said in a tweet. “They don’t get out much, huh?” See Below

Amazed that NYorkers like Judge Judy and the Mooch really believe an elitist, globalist pro-abortion, gun-grabbing, soda-stealing, GOP/DEM/IND/DEM again Bloomberg can beat @realDonaldTrump in 2020. They don't get out much, huh? https://t.co/oEnA6ARhSbhttps://t.co/nn8i2N3301

As we move closer to primary season, it will be very interesting to see if anyone else on the Democrat side throws their name in the race.

Exactly one week ago, Steve Bannon predicted Bloomberg and/or Hillary Clinton would put their names in the mix before the Iowa Caucus in February, as he said “Democrat Centrists” are not pleased with the current list of 2020 cnadidates.

In ending, here is video of Tucker Carlson explaining why Bloomberg is not the candidate Democrats picture: