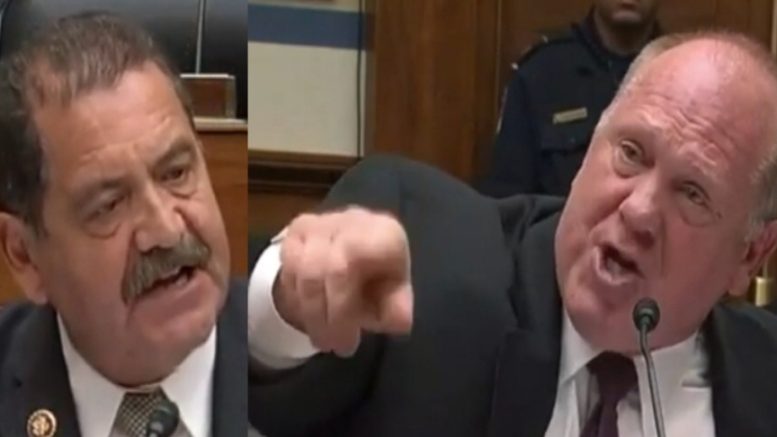 Rep. Jesus “Chuy” Garcia (D-IL) and former acting Immigration and Customs Enforcement (ICE) director, Thomas Homan, got into a heated exchange Friday during a House hearing before the Oversight and Reform Committee.

Homan spent much of his testimony before the committee hearing arguing with Democratic lawmakers who’ve accused Border Patrol agents of mistreating migrant detainees.

Rep. Garcia accused Tom Homan of not caring about migrant children under his watch “because the children don’t look like children that are around you.”

“Mr. Homan, do you understand that the consequences of [the] separation of many children will be lifelong trauma and carried across generations? Have we not learned from the internment of Japanese-Americans? Mr. Homan, a father, do you have children? How can you possibly allow this to happen under your watch? Do you not care? Is it because these children don’t look like that are around you? I don’t get it. Have you ever held a deceased child in your arms?” Garcia asked.

“What I’ve been trying to do my 34 years, serving my nation, is saves lives! So, for you to sit there and insult my integrity and my love for my country and for children … that’s why this whole thing needs to be fixed. And you’re the member of Congress. Fix it!” Homan declared. [Emphasized] (Continued Below)

“We agree on that. But I also disagree with your characterization of immigrants as prone to criminality,” Garcia said before Chairman Elijah Cummings slammed his gavel to restore order and declared that he will “have civility in my hearings.”

Rep. Jim Jordan (R-OH) spoke up and explained, “The gentleman ripped off about 7 different questions designed to go at the character of Mr. Homan, and Mr. Homan should be given a chance to respond. It was ridiculous the way he just rattled them all off and wouldn’t let him respond to them.

Chairman Cummings gave Homan a chance to respond and the former ICE Director expressed, “No one in this room has seen what I’ve seen in my 34-year career. No one has experienced what I’ve experienced. I’ve [seen] many dead bodies coming across this border.” (Continued Below)

“You want to talk about the memo? This memo is ‘one’ option to stop death,” Homan declared raising it in the air. “Not just about enforcing laws to stop death. If you want to legalize illegal immigration, good luck with that! [Be]cause it’s gonna get a hell of a lot worse than that at that border if you say, ‘Okay, from now on, there will be no consequence, no deterrence, it’s not illegal to come illegally. More families will come. 31% of women will be raped, more children will die!”

“We’re a nation of laws. If you don’t like it, sir, change it. You’re the legislator, I’m the executive branch. And I’ve served my country honorably for 34 years. And I will not sit here and let anybody say that I don’t care about children, because ‘you’re not the same color as my children,'” Homan fired back.

Thomas Homan to @Repchuygarcia: "Your comments are disgusting…I've served my country 34 years and yes, I held a five-year-old boy in my arms…for you to sit there and insult my integrity and my love of my country and for children, that's why this whole thing needs to be fixed." pic.twitter.com/gGA7qW4RgU

Rep. Crenshaw Releases A Statement After Getting Emergency Surgery On His Remaining Eye: “I Will Be Effectively Blind For About A Month”