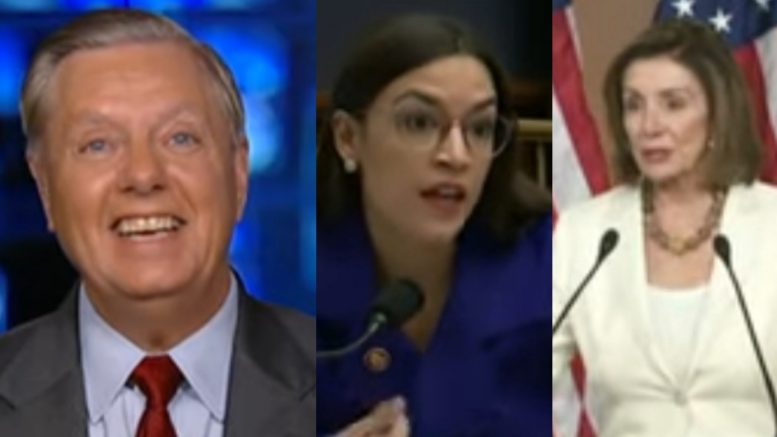 Senator Lindsey Graham sat down with Sean Hannity, where they discussed feuding between Nancy Pelosi and radicals in the Democrat party.

In recent days, Pelosi questioned the level of influence of radical leftist members of Congress, such as Alexandria Ocasio Cortez and Rashida Tlaib after they failed to vote for the $4.5 billion humanitarian package for migrants at the border. This led to Cortez firing back at Pelosi, accusing her of “explicit singling out of newly elected women of color.”

Graham began by stating that Republicans are now more likely to take the House back as a result of the breakdown by Democrats.

He mentioned how 31 Democrats hold Congressional seats where President Trump won their Congressional district. “What does it mean to these 31?,” Graham asked.

“If you cross AOC and the Fab Four, you’re gonna get a primary, and if you vote with them, you’re gonna lose in the general election,” Graham said.

He said Trump and Republicans will be the biggest “beneficiaries” because the policies that radical Democrats are pushing are so out of the “mainstream”. Video Below

So, essentially, the 31 Democrats in strong Trump districts will be forced to choose between “the energy of the Fab Four and the practicality of Nancy Pelosi,” which Graham says is a “no-win situation.”

Graham went on to say that, in the meantime, President Trump should just sit back, enjoy the show, and get re-elected next November. He cited Democrats immigration policy, and how they want to de-criminalize crossing the border and give migrants free health care once they get into the United States.

He declared, “This is insane! It’s insane!” Video Below

Baier Fires Back At The DNC On Their Debate Move: ‘There’s A Bit Of Fox Derangement Syndrome’