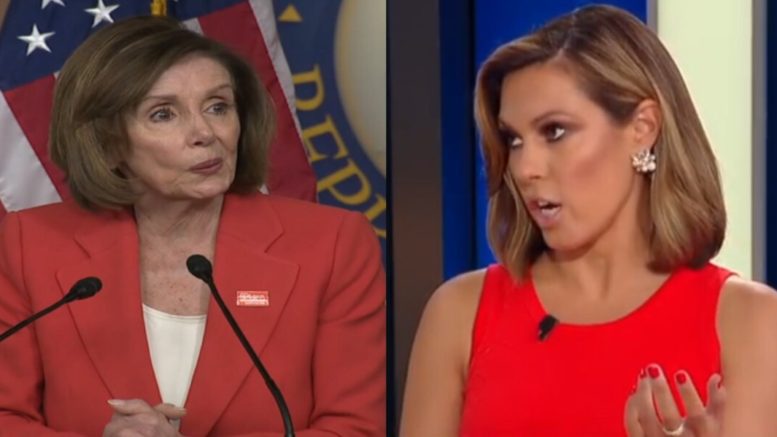 A Pelosi spokesperson told the New York Post the lawmakers “had a productive meeting about the state of play with the Mueller report. They agreed to keep all options on the table and continue to move forward with an aggressive hearing and legislative strategy, as early as next week, to address the president’s corruption and abuses of power uncovered in the report.

On Thursday, Fox News contributor Lisa Boothe blasted the House Speaker during a segment on “Outnumbered Overtime” saying that Democrats are so “disingenuous” adding that, “If Nancy Pelosi really wanted to see President Trump in jail, or thought that he committed crimes that would put him there, she would move forward on impeachment.” (Continued Below)

“She has not because this entire thing is a political exercise and a charade from the left. And, I 100% agree with what Attorney General Barr said. And he said that ‘it’s these people that are resisting a Democratically elected President. They’re the ones that are destroying norms and institutions’– case and point that the fact Democrats want to move forward on potentially holding Attorney General Barr in contempt for not releasing information that he has prohibited by law that he cannot release,” Boothe explained.

“So they still want to move forward with a contempt vote. That is utterly ridiculous and just shows how disingenuous Democrats are on all of this,” she added.

Democratic strategist Jon Summers, however, tried to counter by suggesting that Robert Mueller did not go forward with a case on obstruction of justice because he knew that the Justice Department guidelines prohibited him from indicting a sitting President. (Continued Below)

But, Co-anchor Melissa Francis jumped in and pressed Summers repeatedly on what crime Pelosi believes the president was trying to “cover up.”

Summers couldn’t pinpoint the “cover-up” only to respond, “I think that’s what we need to find out. It would be tied to Russia.”

Francis pointed out that nobody will ask Pelosi directly what “cover-up” is.

Fox Business’ Dagen McDowell suggested that the press won’t ask Pelosi the direct questions because “they know she doesn’t have an answer. They’re avoiding trying to embarrass her because everybody is in her court, quite frankly. There’s nothing there,” she said.

Boothe hit back again at Summers by calling out Democrats’ “hypocrisy” over Mueller’s press briefing when compared to their criticism in 2016 of then-FBI Director James Comey for criticizing Hillary Clinton over her use of a private email server. (Video Below)

“He did the exact same thing– going out there, naming and shaming, despite the fact he didn’t have enough evidence to move forward with obstruction of justice,” Boothe concluded.

(Related: Pres Trump Reacts After Robert Mueller Makes A Statement To The Press: ‘The Case Is Closed! Thank you’)