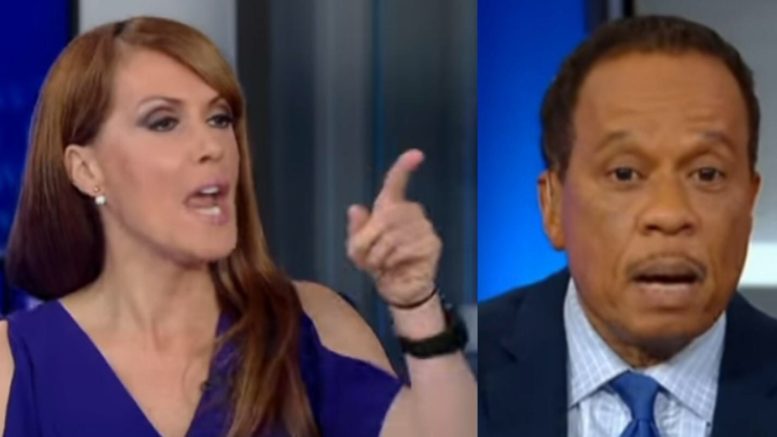 Friday on Fox News’ “The Five”, the discussion got heated as the panel reacted to Attorney General William Barr’s explosive interview with anchor Bill Hemmer.

Fox Business’ Dagen McDowell schooled political analyst Juan Williams during the segment after he took swipes at Barr and seemingly defended dirty cops who tried to take down President Trump.

During an interview that aired Friday, Attorney General William Barr said that he’s not satisfied with answers he’s getting on allegations of the spying that took place during Trump’s campaign.

Barr revealed during his interview with Hemmer, “I’ve been trying to get answers to questions and I found that a lot of the answers have been inadequate. And, I’ve also found that some of the explanations I’ve gotten, ‘don’t hang together’. So, in a sense, I have more questions today than when I first started.”

He added, “I think people have to find out what the government was doing during that period. If we’re worried about foreign influence, for the very same reason, we should be worried about whether government officials abused their power and put their thumb on the scale. I’m not saying that happened, but I’m saying that we have to look at that.”

Barr also commented on the Steele dossier and said, “It’s a very unusual situation to have opposition research to have like that, especially one that on its face had a number of mistakes and a somewhat jejune analysis. And to use that to conduct counterintelligence against an American political campaign is a strange — would be strange development. I’m not sure what role it played, that’s something we have to look at.” (Continued Below)

Dana Perino asked Juan Willaims during the segment, “If you’re Hillary Clinton and you believe that this election was stolen from you because the ‘Russians interfered’, wouldn’t you also want revealed the origins of the investigation?”

Juan responded, “Right, but that’s not what’s going on here Dana. What’s going on is an investigation of the investigators as ‘punishment’ coming from an administration that is overwhelmingly political. Right now they are distracting from the real news with all of this silliness because the real news is we’re gonna soon see transcripts of what Michael Flynn and what Michael Flynn’s lawyer were saying to Trump and Trump’s lawyers.”

He went on to say, “We’ll see how much they were trying to stop this investigation. But the second thing to say here is: listening to Bill Barr, I mean, he has no reason to do anything.” He added, “[Barr] just changes the game time and time again.” (Continued Below)

Then, Juan threw out Fox News poll numbers and said, “If you look, 45% of Americans believe that Barr is covering up for Trump and not being transparent. And also, they give him a negative rating for how he handled the Mueller report. 44% say they don’t approve of what he’s done with the Mueller report….”

The panel laughed at Juan, and Gregg Gutfeld argued that’s it’s just a poll. But, Juan countered and said, “The American people are not being hoodwinked by a guy who is now Trump’s lawyer. This is what Trump wished for all along. He wanted an Attorney General, who would be his consigliere, and now that’s what he’s got.”

Gutfeld blurted out, “What’s happening right now, the Russian story is now into its summer reruns. I saw it on the first run, I don’t need to see it again. I know what this Flynn story is about. That’s because the economy is going well, the world is peaceful, prosperous, everything is fine. They have to keep doing the Russian story.”

Dagen McDowell believes Obama-era intelligence officials are worried about what Attorney General William Barr’s investigation into the origins of the Russia probe will find and explained that that is why some Democrats are questioning Barr’s motives.

She schooled Juan after he called Barr’s investigation silliness: “They are trying to discredit him because they are worried, people who worked in the Obama administration, in the FBI and in the CIA and the intelligence community, they are worried. Whether it’s Brennan or Comey or even subordinates of both of them. They are worried about what Bill Barr and John Durham and the Inspector General Michael Horowitz are going to find,” McDowell said.

“If you read the whole Mueller report, the whole Mueller report basically discredits [a] big, big elements that were in that dossier. And, I just want to point this out: I point it out all the time… Jim Comey looked at Brett Baier in the Spring of last year and said ‘I can’t definitively say… I know that the Steele dossier was paid for by the DNC and the Clinton campaign.'” McDowell said. “He was running the FBI, that got a warrant on an American citizen to spy on him and he didn’t know that?” (Continued Below)

McDowell continued, “That is balderdash and hogwash and mmmhmmm. We all know it. And by the way, I also read that poll Juan, and here’s what people said, ‘A majority– 58% think it is at least somewhat likely that the FBI broke the law when it started investigating the Trump campaign. The millions of Americans who don’t trust what went on in intelligence and the FBI, under the Obama administration, they deserve answers! And there’s nothing wrong with a thorough look at, because again, it disrupts the democracy in this country!”

Juan jumped in and claimed, “They had a thorough look. What we’re doing now is trying to punish the investigators.”

But, McDowell shot back and blasted Juan, “Mueller didn’t look at it! Bill Barr said that. I read the whole Mueller report. He did not look at the investigators and the predicate of that investigation.”

Juan went on to say, “You don’t need Mueller, pick up a newspaper. It will tell you how this started.”

McDowell slammed Juan once again and argued, “But the press that lied to us for three years about Russia! Liars… all of them.” (Video Below)

(Related: Gutfeld Goes Off On Juan & Issues A Warning: ‘If You Say That Again, I’m Gonna Throw You Off The Set!’

House Cmte. Members Urge Sergeant At Arms To Fine Pelosi $5,000 For Breaking ‘Her Own Rules’ On Security Clearance