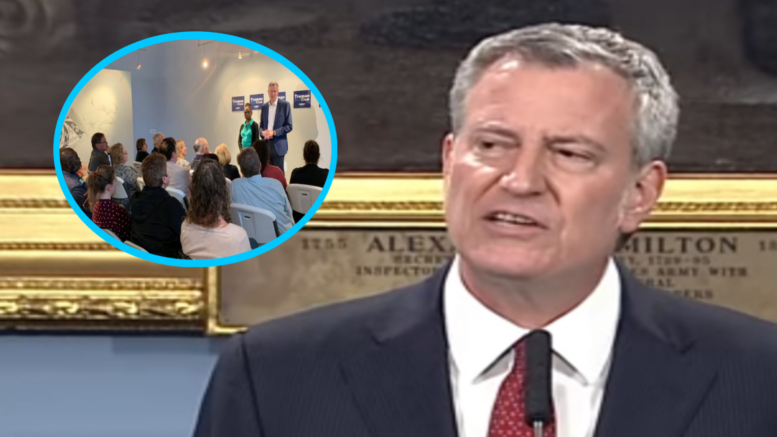 New York mayor Bill de Blasio appears to have quite the challenge of trying to garner the excitement needed to run a successful campaign against President Trump, let alone, the growing list of candidates in his own party.

De Blasio, who announced his Presidential bid earlier this week, attended a Democrat party fundraiser, while in Sioux City, Iowa. And things were not looking too promising for him.

Rauh uploaded the photo and captioned it, “De Blasio speaks to his largest crowd of the day in Iowa at a Woodbury County Democratic Party fundraiser in Sioux City.”

She added, “The total headcount (not including press or de Blasio campaign aides) was 30 by my count.” See Below

The total headcount (not including press or de Blasio campaign aides) was 30 by my count.

Rauh said that during his speech, de Blasio referred to President Trump as “Con Don,” and someone had to correct him when he slipped up at one point.

De Blasio is referring to President Trump throughout his remarks at “Con Don” and when he slipped up at one point someone in the audience corrected him. pic.twitter.com/Ulqj4FvD7t

In ending, here is Donald Trump Jr.’s reaction to de Blasio’s decision to run for President.

Rather than do a PR stunt “run” for President (we all know it’s going nowhere) maybe @NYCMayor should clean up his backyard first. This video from this morning should tell you all you need to know about his “leadership.” What a clown show!!! pic.twitter.com/E9kTUQXfTR