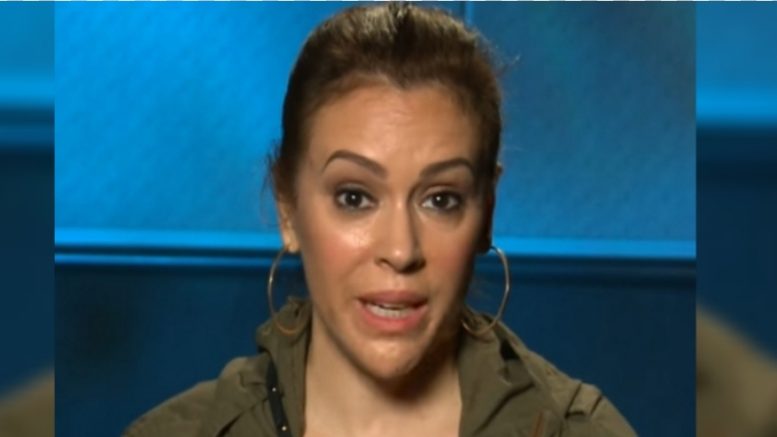 Hollywood actress Alyssa Milano made one of her biggest statements yet in her push for, what she considers, women’s reproductive rights.

Milano is currently in the middle of pushing for all of Hollywood to boycott Georgia due to the state’s bill that will ban abortion after six weeks. And now, she is pleading with her female fans to “stop having sex until we get bodily autonomy back.”

Milano posted a meme calling for a #SexStrike that read, “If our choices are denied, so are yours.”

She then captioned the meme, “Our reproductive rights are being erased. Until women have legal control over our own bodies we just cannot risk pregnancy.”

She continued, “JOIN ME by not having sex until we get bodily autonomy back. I’m calling for a #SexStrike. Pass it on.” See Below

As her tweet began to circulate, Milano appeared to have struck a nerve, but most likely not the way she intended. In other words, it likely backfired big time!

Majority of Twitterverse, who reacted to Milano, mocked her call-to-action, and suggested that the pro-choice liberal celeb may actually be promoting more of a pro-life stance.

Down below, we have compiled some of the most highly engaged replies to Milano. See Below

If this was soccer, @Alyssa_Milano would have scored on her own team. 😂😂😂😂😂😂😂

I fully support this… anything to prevent liberals from breeding. 🤭

I fully support this pro-life cause.

Does anyone else see the irony in calling for a #sexstrike to gain choice regarding unintentional pregnancies?

Isn’t this called abstinence? And isn’t this exactly what conservatives wanted?

Brilliant idea thank you! All liberals/Democrats please never have sex again! This will solve so many problems. The majority of Americans are pro-life, pro-Second Amendment and pro-@realDonaldTrump – it's the way it is. 😇 🇺🇸

First time I’ve ever seen a pro-choicer advocate for personal responsibility. Kudos! If y’all have a rally LMK I’ll be there

Seriously, I don’t get the downside here.

Pro choice feminist: “If we can’t kill our unborn babies anymore, we won’t have sex anymore!”

Pro life conservative: “Wasn’t that the idea all along? It’s working!”

Hmmmm, I had no idea that condoms & birth control pills are being outlawed – please let us know where this is happening…& abstinence apparently works as well…you have lost no rights – you are spouting propaganda & justification for the murder of innocent babies;- you are evil

Don’t let anyone talk you out of this Alyssa. It’s a fantastic idea. Less clients for Planned Parenthood! It’s what we’ve always wanted. 😂😂😂