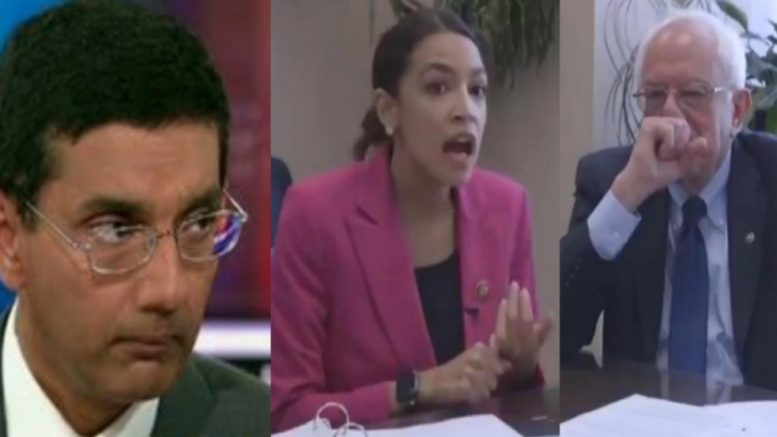 America’s tag-team Democrat Socialist duo, Bernie Sanders and Alexandria Ocasio-Cortez, appeared in a video on Thursday where they were proud to announce new proposals they had in mind to put a stop to “greed” of the banking system.

Among the proposals, which included capping the credit card interest rate at 15%, Ocasio-Cortez had the privilege of mentioning their joint-idea of having the US Postal Service handle banking services.

Cortez said, “We should have a not-for-profit public option for basic banking services, and we should be piloting these projects through the United States Postal Service”.

Democrat Presidential Nominee, Bernie Sanders, could be seen nodding his head and vocally agreeing with Ocasio-Cortez’s  as she stated their idea.

Dinesh D’Souza came across the snippet of AOC and Bernie and wasted no time destroying their plan with a sheer comeback of his own.

Dinesh said, “The reliably dumb @AOC wants to turn banking services over to the US Post Office, which didn’t even offer overnight delivery until the private company FedEx came along.”

He added, “What’s next? Turn airplane manufacturing over to the DMV? See Below

The reliably dumb @AOC wants to turn banking services over to the US Post Office, which didn’t even offer overnight delivery until the private company FedEx came along. What’s next? Turn airplane manufacturing over to the DMV? https://t.co/zXH8mtiCpT

In ending we leave you with Dan Bongino’s response as well as an awkward hug by the two Democrat leaders caught on camera.