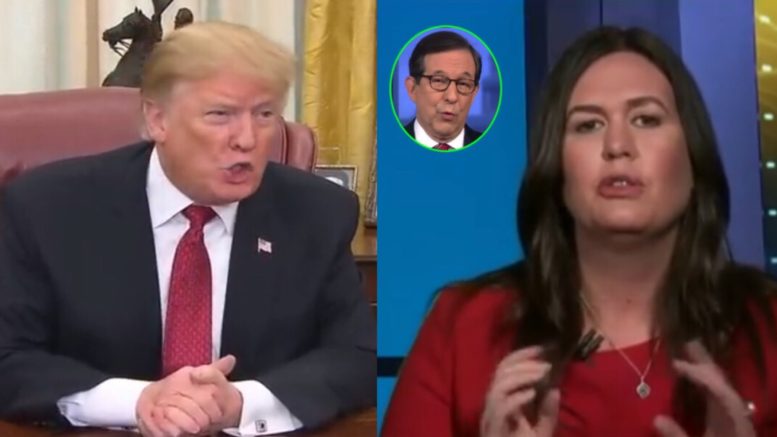 President Trump tweeted on Friday, “Due to the fact that Democrats are unwilling to change our very dangerous immigration laws, we are indeed, as reported, giving strong considerations to placing Illegal Immigrants in Sanctuary Cities”.

The press security explained that the White House is looking at “all options” as long as Democrats continue to ignore the crisis at the southern border.

“[Democrats] continue to refuse to sit down with President, Republicans in Congress, and to come up with a solution to stop the national security and humanitarian crisis, and the number of illegal immigrants that are flooding across our border, then we have to look at all options across the table,” Sanders made clear.

Sanders further said that the towns on the border are taking on the entire burden and added, “So, we’re shifting that burden to places who constantly claim to want to have open borders and want to have an open city. So let’s put some of those people into their communities and into their towns and see if they are okay then with that same impact.” (Continued Below)

“The big part of the question, and the big part that we have to look at here is: how do we stop this from being a problem in the first place? We shouldn’t have to be putting people and moving them all across the country to spread that out. We should have a border that’s strong, a border that’s secure, a border that functions the way it’s supposed to. That’s the President’s number one priority.” Sanders insisted.

Sanders believes that nobody thinks this is the ideal solution but, “until somebody can fix the crisis at the border we have to look at all options and this is one of them.” She added, “Whether or not it moves forward, that’s yet to be determined. This was raised at a staff level initially, and pushed back on. The President wants us to explore it.” (Continued Below)

“Again, the Democrats, including the mayors and members of Congress in these communities want these individuals, they should be helping the President, frankly look for solutions to bring them to their communities, instead of fighting the President every step of the way. Let’s work together. Let’s solve the crisis at the border and let’s figure out how it doesn’t make a massive impact on any one particular community, like we’re seeing in a lot of the border towns all along our southern border.” The press secretary explained.

Further she pointed out that the President is a person of law and order and has been his entire focus since day one; restoring law and order to this country.

“It would be really nice and much simpler if Congress would spend 15 minutes and sit down with the President and let’s just come up with the best solutions, so that we don’t have to do this, we don’t have to look for all of these different options. It seems so basic and yet, Congress refuses to spend all of it’s time attacking the President, investigating the President on these taxpayer funded – fishing expeditions that are completely outrageous and completely baseless, instead of doing their job.” She fired off.

The press secretary concluded that Democrats don’t have a solution to fix immigration. “Their only plan is to fight the President. It’s a sad day in America when the Mexican government is willing to do more for the United States illegal immigration problem than Democrats in Congress.” (Continued Below)