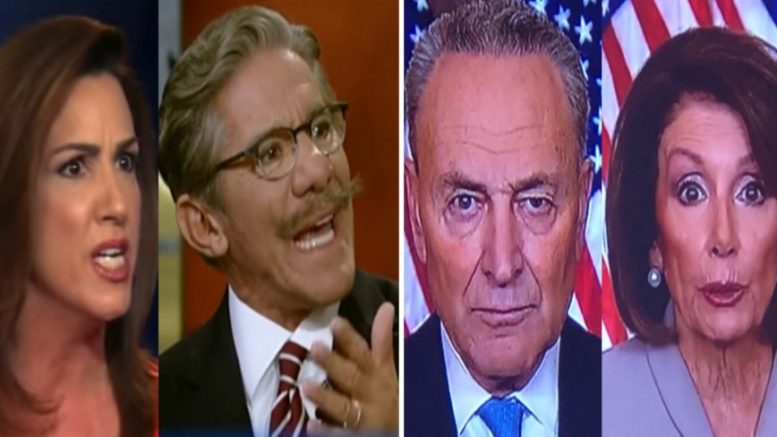 The government shutdown has approached 30 days and Democrats’ ongoing resistance to Trump makes it feel like the chances of a deal being worked out are no better than they were on Day #1.

While President Trump continues to invite Democrats to the table and has even shown a bold willingness to compromise to end the shutdown, leaders of the left have continued to turn their nose up to any idea of the President getting his campaign-promised wall.

One day following the President’s ‘major announcement‘ on Saturday, Geraldo Rivera and Sara Carter turned up the pressure on Nancy Pelosi and Chuck Schumer with back-to-back statements.

Although their statements don’t appear to be a planned attack, Geraldo and Carter’s remarks showed union on what millions of Americans are likely thinking about Pelosi and Schumer during this critical time, which is: “Get to the darn negotiation table with Trump and work out a compromise already!”

Geraldo was the first of the pair to fire off a shot, where he said, “We should demand of our elected leaders, Negotiate. [President Trump] has made an offer [Speaker Pelosi] and [Senator Schumer] there is no excuse not to negotiate. Make a counter offer. Don’t hide behind slogans-Immigrant & federal worker, People’s futures are on the line. Talk to each other.” See Below

Sara Carter, who must have seen Geraldo’s tweet, took a moment and added on to what he said.

Carter turned up the heat even higher on Pelosi and Schumer, when she said, “Yes, [Speaker Pelosi] & [Senator Schumer] step up and negotiate. DACA and immigration issues are up for negotiation- it doesn’t appear you want to do what’s best by hiding. Reach out, negotiate-people are exhausted by this behavior on both sides.”

She continued, “[President Trump] is doing it, so should u.” See Below

Before Voting On The Anti-Hate Resolution, Rep. Zeldin Calls Out Omar: ‘She Knows Exactly What She Is Doing’