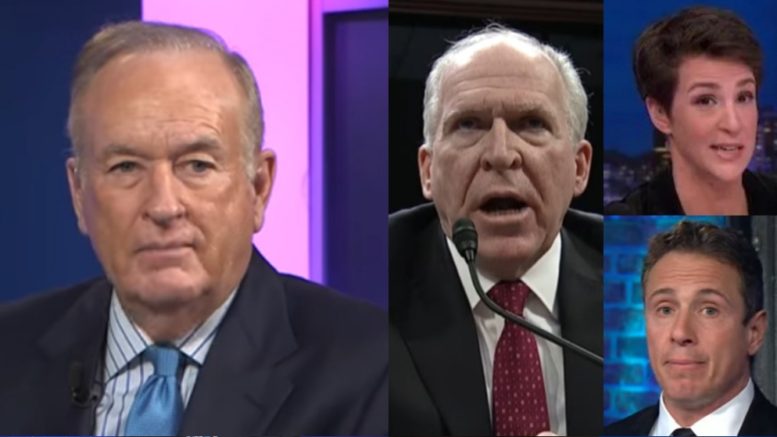 Bill O’Reilly appeared with Wayne Allyn Root of NewsMax to give insight on some of the latest topics the political arena.

At the beginning of their discussion, the subject came up regarding the announcement of Special Counsel Mueller’s findings, and how it affected ratings of major news networks.

O’Reilly pointed out how he thinks the ratings of sources, primarily those of CNN and MSNBC, were crushed on Monday due to their 2-year Russia collusion narrative being proven wrong.

And things appear to be looking bad for some pundits, including former CIA Director John Brennan, who played a major part in pushing the false Russia collusion narrative. O’Reilly said, “The pundits like Brennan, those people, they’re through. You’re not gonna see them anymore.”

Related Article:  Sarah Sanders Warns Democrats Over Their Post-Mueller Report Rhetoric: ‘Be Very Careful Pushing Too Far Down That Road’

He then stated that anchors, such as Rachel Maddow and Chris Cuomo, are safe for now because, he thinks, getting rid of them would be equivalent to the corporations who pay them “admitting that the whole operation is incompetent.” Video Below

O’Reilly claims, “The audience will dwindle for CNN and MSNBC. You could see it on Monday…big news night on Monday. They got crushed, those two networks.”

He also believes that popular newspapers are also on the brink of destruction after playing a major part in the fake collusion spin, as well.

O’Reilly said, “New York Post, damaged beyond repair. Washington Post, worse shape because of the lawsuit from the Covington kid. Washington Post is really in trouble.” He concluded, “So, there will be consequences for convicting President Trump based on a wish, not consequences.” Video Below