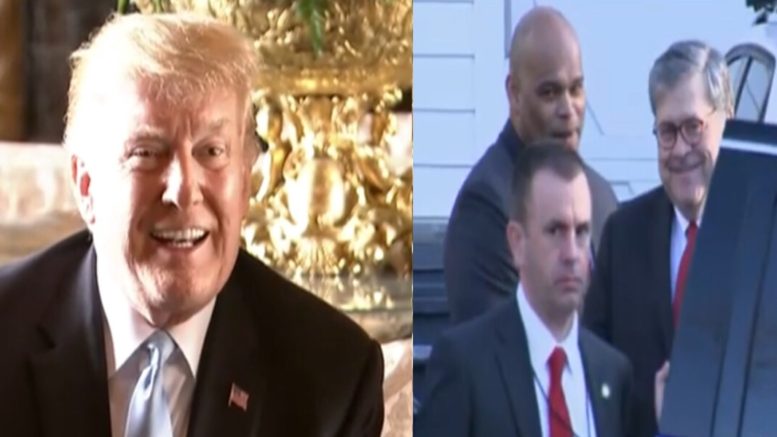 Attorney General Bill Barr plans to submit the full version of Special Counsel Robert Mueller’s Russia investigation report to Congress by “mid-April, if not sooner,” and will not give the White House a sneak peek.

This comes after Barr submitted a four-page summary to congressional leaders on Sunday reporting Mueller did not find evidence of Trump-Russia collusion. President Trump responded to the press Friday afternoon about the news.

“Everyone will soon be able to read it on their own,” Barr said in his letter. “I do not believe it would be in the public’s interest for me to attempt to summarize the full report or to release it in serial or piecemeal fashion.”

(Related: In A Jam-Packed MI Rally Speech, Pres Trump Seals The Deal On The ‘Russia Hoax’ For Good)

The new letter provides more insight regarding what details of Mueller’s report will be redacted and kept out of the public’s view. Mueller is assisting the agency in this process, Barr said. (See letter Below)

Washington Examiner reported that Barr identified four categories of information that will not be made public, including material related to grand jury proceedings which by law cannot be made public, information deemed by the intelligence community to compromise sensitive sources and methods, details that could affect other ongoing investigations — including those referred by the special counsel’s office to other offices — and material that would “unduly infringe on the personal privacy and reputational interests of peripheral third parties.”

The president could also assert executive privilege to withhold certain information such as his communications with others. But Barr said the Justice Department does not intend to give the report to the White House first, per Washington Examiner.

“Although the president would have the right to assert privilege over certain parts of the report, he has stated publicly that he intends to defer to me and, accordingly, there are no plans to submit the report to the White House for a privilege review,” Barr told lawmakers. (Video Below)

While taking questions from the press on Friday, President Trump said, “he has great confidence in the Attorney General.”

The president also explained that a lot of things are also coming out with the “other side” as well.

(Related: After Lunch, Trump Opens Up To Reporters On How He Feels About Mueller’s Report: ‘It Could Not Have Been Better’)

(Related: Newt Gingrich Makes His Case On How Democrats Have Spun Too Far Out Of Pelosi’s Control)