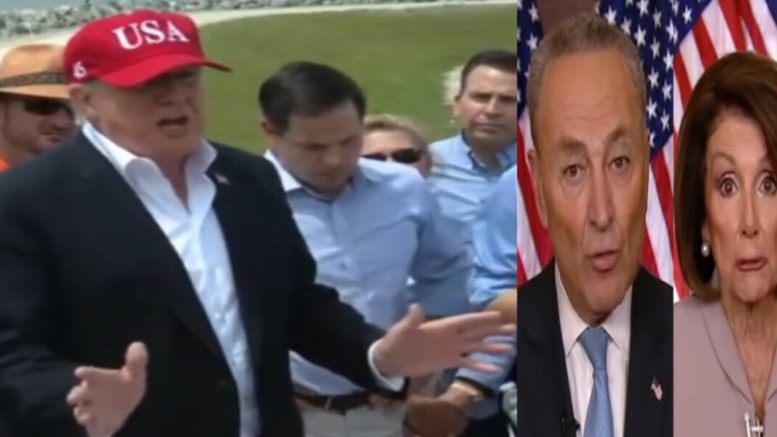 The Commander in Chief is serious when it comes to the safety and security of our country. He promised he would build the wall during his campaign, and as President, he’s keeping his vow.

President Trump took to twitter Friday and Saturday renewing his commitment to close the southern border if Mexico doesn’t stop all illegal immigration coming into the United States.

The U.S. southern border system “is past emergency and truly at the breaking point,” Department of Homeland Security (DHS) Secretary Kirstjen Nielsen said.

She stated Friday that the possibility of closing the southern border with Mexico is “on the table,” adding, “If we have to close ports to take care of all of the numbers that are coming, we will do that. … It’s on the table.”

(Related: Sarah Sanders Signals Crunch Time For Dems: ‘Will They Decide They Love Our Country More Than They Hate This President?’)

Nielsen asserted that there are so many people coming to the areas between legal ports of entry that DHS is being forced to reallocate its resources, basically taking personnel from legal sites and sending them to the portions of the border where migrants are slipping in illegally, reported Fox News. (Continued Below)

DHS officials also say they recently saw the 100th large group of migrants crossing illegally this year. A large group is a classification for more than 100 people traveling together.  (Continued Below)

In a series of tweets, President Trump renewed his vows close the border and exposed Democrats’ weakness.

He wrote on Thursday, “The DEMOCRATS have given us the weakest immigration laws anywhere in the World. Mexico has the strongest, & they make more than $100 Billion a year on the U.S. Therefore, CONGRESS MUST CHANGE OUR WEAK IMMIGRATION LAWS NOW, & Mexico must stop illegals from entering the U.S through their country and our Southern Border.”

“Mexico has for many years made a fortune off of the U.S., far greater than Border Costs. If Mexico doesn’t immediately stop ALL illegal immigration coming into the United States through our Southern Border, I will be CLOSING the Border, or large sections of the Border, next week.” He said without hesitation.

The President further added, “This would be so easy for Mexico to do, but they just take our money and “talk.” Besides, we lose so much money with them, especially when you add in drug trafficking etc.), that the Border closing would be a good thing!”

On Saturday he doubled down and wrote, “It would be so easy to fix our weak and very stupid Democrat inspired immigration laws. In less than one hour, and then a vote, the problem would be solved. But the Dems don’t care about the crime, they don’t want any victory for Trump and the Republicans, even if good for USA!”

He concluded, “Mexico must use its very strong immigration laws to stop the many thousands of people trying to get into the USA. Our detention areas are maxed out & we will take no more illegals. Next step is to close the Border! This will also help us with stopping the Drug flow from Mexico!” (Video Below)

The President emphasized “I am not kidding around” about closing the border. “It could mean all trade” with Mexico, he said when questioned on Friday by reporters in Florida. “We will close it for a long time.”