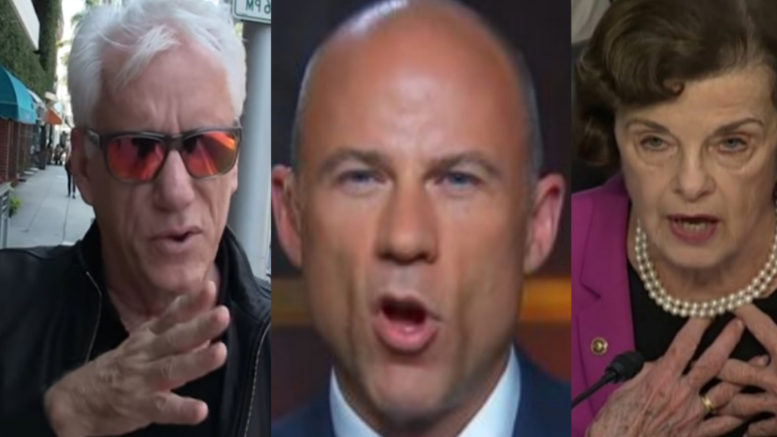 It was a bad day for Stormy Daniels’ ex-lawyer, Michael Avenatti, who was arrested on charges of extorting up to $25 million from Nike, embezzling money from one of his clients and defrauding a bank from Mississippi.

Avanatti could face close to 100 years in prison if convicted of charges and possible disbarment.

His arrest follows a stint of bad luck that includes being arrested over domestic violence allegations, losing some of his most prized assets in a divorce settlement and being referred to the Justice Department over suspected false allegations made against Brett Kavanaugh.

Related Article:  Avenatti Sends An SOS To Dems As Trump’s Address Gives Him A Rude Awakening: ‘We Better Nominate A Battle Tested Fighter’

Soon after news broke of his arrest, conservative actor, James Woods, couldn’t help but unleash on Avenatti, as well as the media and Democrats who supported his cause while he tried to make a name for himself.

Woods began by voicing his joy upon reading the news of Avenatti’s arrest. He said, “When Monday is even better than the best weekend you’ve ever had,” most likely referencing the Mueller findings released over the weekend. Video Below

He ridiculed CNN for having to write the article about the man they once propped up for his fight against President Trump and false statements made about Brett Kavanaugh.

Woods bashed CNN and used a collage of Avenatti pictures as Exhibit A for why they are “The Enemy of The People.”

He then went on a full-blown attack on Avenatti, where he dug up old tweets, one in particular that he called Donald Trump Jr. “Buttercup, as seen here:

Woods used the “Buttercup” nickname and portrayed it on Avenatti, who now finds himself facing potential prison time. The hashtag #BuckleUpButtercup can be seen in many of his tweets directed at Avenatti.

He then posted a picture referencing President Trump’s big weekend. In his caption, Woods said, “After enjoying #WinningWeekend President Trump will now start lancing the abscesses that have infected this great nation for the past two years. Starting with the lowest hemorrhoid…”

He added, “Trump knows how to serve a cold, cold dish of vengeance… #ButtercupAvenatti #BastaBoy”

He said, “Remember that Senate Democrats literally tried to derail a Supreme Court nominee on the basis of claims made by Michael Avenatti. Shame on you, @SenFeinstein. Shame on every single one of you.”

Remember that Senate Democrats literally tried to derail a Supreme Court nominee on the basis of claims made by Michael Avenatti. Shame on you, @SenFeinstein. Shame on every single one of you.

In ending, we leave you with Alan Dershowitz discussing the Avenatti fallout.

Avenatti Gets Rocked With Another Violent Incident Described By His Accuser