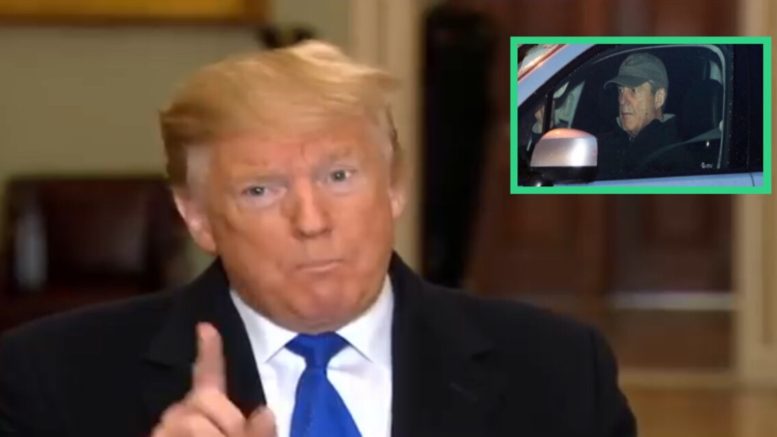 President Trump spoke briefly on Tuesday with the press ahead of a meeting with Republican Senators in wake of the Mueller report findings.

This comes after it was revealed in a letter from Attorney General William Barr that Mueller found no evidence to prove Russian collusion among the Trump campaign, as well as no significant evidence to prove obstruction of justice.

The President told the press there was “no collusion, no obstruction, nothing.” He added, “We are doing so well. We probably have never had a time with prosperity like this, it’s great.”

When asked by a reporter, “Do you think the people that launched an investigation into your campaign are treasonous acts– how high up do you think it went?”

He reiterated, “This should never happen to a President again. We can’t allow that to take place.” (Video Below)

Trump also said Tuesday that the GOP will become “the party of health care” a day after the Justice Department announced it is siding with a district court ruling that found the Affordable Care Act unconstitutional.

“Let me just tell you exactly what my message is: The Republican Party will soon be known as the party of health care. You watch!” President Trump declared. (Video Below)

The president’s remarks came a day after the Justice Department ramped up its legal battle with former President Obama’s signature law. The department previously argued in court that the law’s pre-existing condition protections should be struck down. Now, the Trump administration argues the entire law should be invalidated.

U.S. District Judge Reed O’Connor ruled in December that the Affordable Care Act’s individual mandate is unconstitutional and that the rest of law is therefore invalid.

President Trump after speaking with reporters tweeted, “The Republican Party will become “The Party of Healthcare!”

(Related: When Pressed On Mueller’s Findings, Trump Has One Comment For The Media: ‘America Is The Greatest Place On Earth’)

(Related: Sarah Sanders Warns Democrats Over Their Post-Mueller Report Rhetoric: ‘Be Very Careful Pushing Too Far Down That Road’)

James Woods: “In The Past Four Years The Press Has Obliterated Its Credibility”