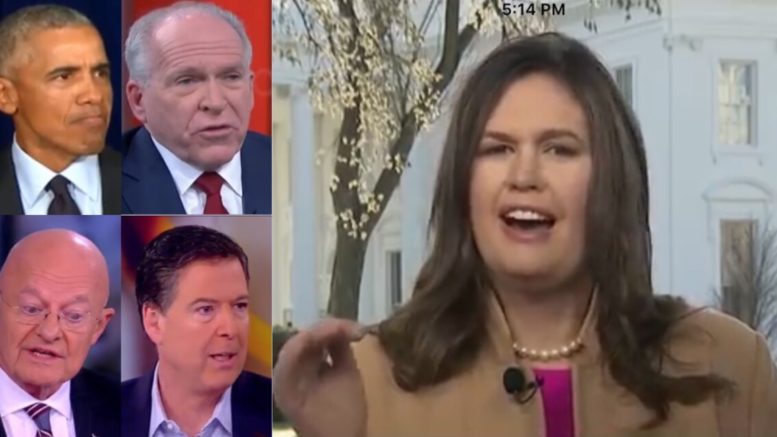 This comes after Attorney General William Barr released a summary concluding that Special Counsel Robert Mueller’s investigation found no Russia collusion with President Trump or anyone associated with his campaign.

The White House press secretary explained, as she has repeated for over the last two years, that there was “no collusion and no obstruction.”

“Frankly, I think the Democrats need to be really careful here. So far what they are doing here and what they’re saying, they should should be embarrassed by. They have said for two years– they have repeatedly and breathlessly attacked the President and perpetuated this malicious lie that the President was some sort of foreign agent and working with the Russian government in order to win the election.”

(Related: Trump Breaks His Silence On Special Counsel’s Report As Barr Releases Findings: ‘This Was An Illegal Takedown That Failed’)

She noted that the underlining interference between Russia took place under the Obama administration. (Video Below)

“Lets not forget that Clapper, Comey, and Brennan were the ones leading the intelligence community when these things took place, and Obama was the President at that time. They knew about it. They did nothing to stop it, and I think they need to be very careful about pushing too far down that road.” Sanders warned.

Sarah went on to say that the President won, because he was a better candidate with a better message and a better vision for the country, further adding that he outworked his opponent.

“[Democrats] have failed every at every step of the way to defeat this President, and they’ve done it again. This time they did it at the sake of the American people by putting them through this outrageous process, by wasting their money and making this such a big part of everyday life for Democrats in the media, when they should be focusing on the economy, ISIS, and everything else.” She said. (Video Below)

Asked why so many people chose to believe the dossier in the first place, Sanders replied, “Because, they wanted to Bill. It’s real simple: they wanted to. They didn’t want to believe Donald Trump had defeated them. They didn’t want to believe their own failure. But this report further confirms what we all knew in November of 2016: Donald Trump won. And he won decisively, he won fairly, and he won because he was better.”

“I think Lindsey Graham said it best.” Sarah said. “He was one of the people that failed to do his job. He lied throughout the process, he leaked information that should’ve never been public. James Comey has been a disgrace to the FBI. I think he has a lot of explaining to do and if Congress wants to call anybody up to the Hill, he should be one of the very first followed by his friends, Clapper and Brennan.”

“If they want to really look at what happened and the failures of 2016 were, they need to look inside of the Obama administration because that’s where they took place.” Sanders concluded.  (Video Below)