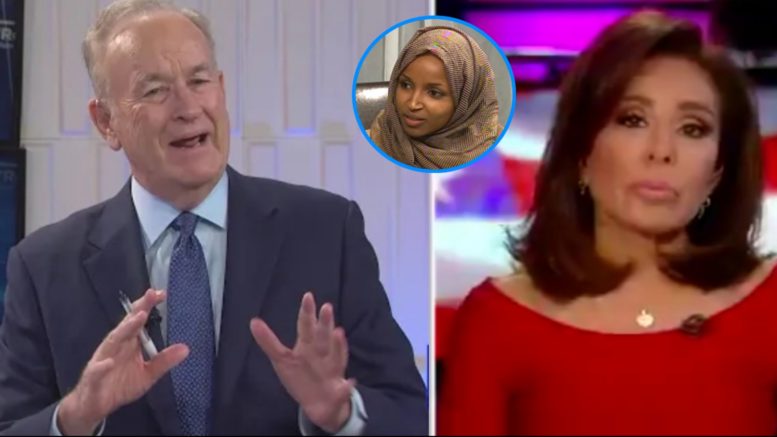 Fox News is not too happy with their star host, Judge Jeanine Pirro, after remarks she made against Ilhan Omar on her Saturday night program.

Jeanine questioned whether or not Omar is against the U.S. Constitution, citing a hijab that the freshman Democrat representative wears.

Judge Jeanine connected Omar’s hijab to the potential practice of Sharia Law, which she declared can not co-exist with the Constitution. She later said that she was only trying to start a debate on the issue as it was stated in question format.

She also clarified “if one is Muslim does not mean you don’t support the Constitution,” and invited Omar on her program to discuss “important issues affecting America”.

Fox News issued a statement that read: “We strongly condemn Jeanine Pirro’s comments about Rep. Ilhan Omar. They do not reflect those of the network and we have addressed the matter with her directly.”

Former Fox News host, Bill O’Reilly, caught wind of the drama as it unfolded from his prior place of employment, and responded appropriately. See Below

O’Reilly could not believe the move Fox made, especially after Omar questioned Americans who support Israel. So he dropped a tweet to voice his reaction.

Related Article: Bill O’Reilly Exhibits Why 2019 Will Be Bad For MSM: ‘They Killed The Goose [That Laid The Golden Egg]

He said, “So let me get this straight: Congresswoman Omar can question the motives of Americans who support Israel, but Judge Pirro cannot question Ms. Omar’s motives? Do I have that straight? Nix the nonsense, get smart news analysis on http://BillOReilly.com .” See Below

So let me get this straight: Congresswoman Omar can question the motives of Americans who support Israel, but Judge Pirro cannot question Ms. Omar’s motives? Do I have that straight? Nix the nonsense, get smart news analysis on https://t.co/rryWmyXe7C.

Here is a clip that contains the statement made by Judge Jeanine that upset Fox:

President Trump was right when he said the democrat party is now the anti-Israel party. Don’t forget Nancy, history has proven over and over when you appease to anti-Semitic sentiment, the worst happens. #OpeningStatement pic.twitter.com/vrnzhcu95o