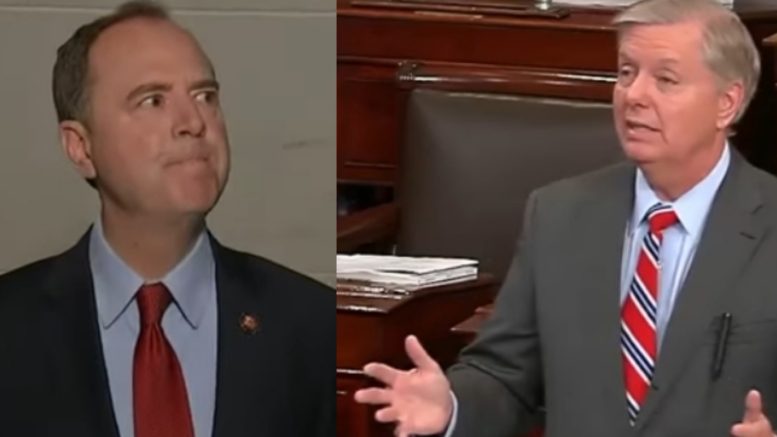 Senate Judiciary Chairman Lindsey Graham is ready to play some hardball with Democrats in their impeachment efforts against President Trump.

On Wednesday, Senator Graham reacted to Rep. Jim Jordan’s challenge for Adam Schiff to release transcripts from special envoy Kurt Volker’s testimony as well as all text messages and documents related to his closed-door hearing.

In an interview with Fox News, Jordan claimed Volker’s testimony clearly shows there was no “quid pro quo” between President Trump and Ukraine President Zelensky, which is what Democrats have been basing much of their impeachment narrative on.

“Release the transcript so they can see what Ambassador Volker spent nine hours telling us — that there was no quid pro quo,” Jordan said.

Senator Graham showed he is ready to take matters into his own hands and issued an ultimatum to Democrats, at the lead of Adam Schiff, if they fail to release Volker’s transcript to the public.

“If House D’s refuse to release full transcript of Volker testimony as requested by Congressman Jordan, it will be an abuse of power,” Senator Graham said in a tweet.

“If this continues, I will call Volker before the Senate Judiciary Committee to testify publicly to ensure the full story is told,” he declared. See Below

If this continues, I will call Volker before the Senate Judiciary Committee to testify publicly to ensure the full story is told.https://t.co/jNi3KQ3wRB

Lindsey Graham is ready to look into “all things Ukraine,” and even recently suggested that he will give President Trump’s attorney Rudy Giuliani a chance to discuss his side of the story to the Senate Judiciary Committee in regards to all of the Ukraine-related drama.

In ending, here is a video of Giuliani comparing Democrats’ impeachment effort to the Salem Witch Trials.