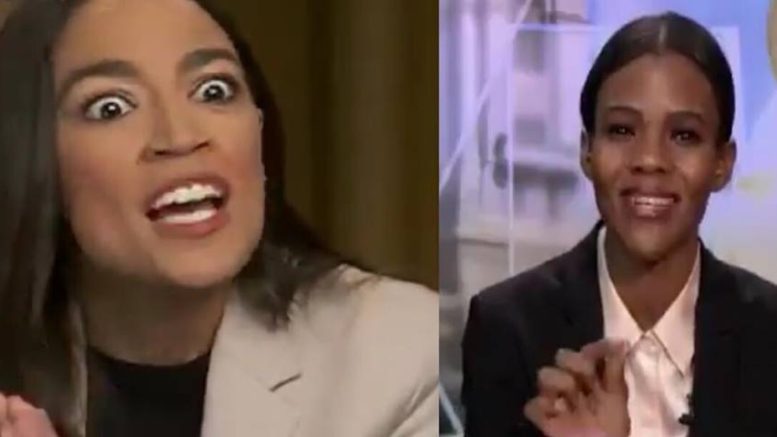 Candace didn’t hold back and pointed out that people are actually holding Cortez to task because she knows absolutely nothing, and she made it to Capitol Hill. (Video Below)

During the interview with Candace Owens, Judge Jeanine began the segment where she played a clip of Alexandria Ocasio-Cortez from last summer discussing Palestine and she didn’t know what she was talking about. “Yeah, I mean, I’d think I’d also… I am not the expert on geo-politics on this issue.” Cortez confessed.

Candace laughed at the clip played  of Cortez and responded, “Look, that particular scene I have to find it be quite funny, but I’m kind of in a camp now, where I think we have to stop mocking her and understand what’s happening here.”

“First and foremost she’s constantly presenting herself, even in that interview, as a little girl. She comes across like she’s 16 years old. She’s not. Because we keep calling her the youngest person in Congress, it allows her to play the part of victim like she’s some girl on the playground that keeps getting bullied. She’s not. She’s a 30 year old adult woman who is talking about dangerous ideas.” Candace explained.

Candace pointed out that Cortez talks about socialism: ideas once pushed by Joseph Stalin and Vladimir Lenin. “We have to start talking about her position, because this is something that is actually extremely alarming in America.” (Video Below)

Judge Jeanine pointed out that Cortez herself claimed she was “from the hood,” but in fact, she actually went to one of the most expensive schools: Boston University.

The Judge moved on to the next clip of Cortez discussing taxes in an interview on “60 Minutes” with Anderson Cooper. Cortez claimed, “once you get to the ‘tippy tops’ of your taxes on your 10 millionth dollar, sometimes you see tax rates as high as 60 or 70 percent. It doesn’t mean all 10 million are taxed at an extremely high rate. As you climb up this ladder, you should be contributing more.”  (Video Below)

Judge Jeanine let Candace take over and respond to Cortez’s ignorance, “Go ahead, Candance,” she said.

“First and foremost, I’m gonna point again the way she presents herself.” Candace continued as she raised her hand showing her index and thumb finger representing something small. “The ‘tippy top?’ I don’t know why she’s speaking like that. She’s a 30 year old adult woman, but she does not understand economics whatsoever, and unfortunately, a lot of these interviewers are not hitting back hard at her and asking her to explain her positions.”

The Judge pointed out that Cortez suggested during the partial government shutdown that Congress shouldn’t take a salary, but Cortez is taking hers. “But, that doesn’t matter, I guess. It’s just hypocrisy.” She said.

Next, a clip was played where Cortez compared herself to Abraham Lincoln and Franklin D. Roosevelt. In the clip Cortez said, “I think that it’s only has ever been radicals that have changed this country. Abraham Lincoln made the radical decision to sign the Emancipation of Proclamation. Franklin Delanor Roosevelt made the radical decision to embark on establishment programs like social security. That is radical!”

When asked by Cooper Anderson on “60 Minutes” if she calls herself a radical, Cortez quickly exclaimed, “Yeah, if that is what radical means, call me a radical!”

Candace shot back, “First and foremost, she she should know Abraham Lincoln was a Republican, and she’s representing the opposite party. I think she knows absolutely nothing about American history, absolutely nothing about world history. Forget history, she doesn’t even understand world current affairs, otherwise she wouldn’t be pushing forth socialism, as we understand it’s completely made Venezuela an absolute mess, and those people are actually fleeing those countries trying to come into our own.” Candace said.

“Again, this a woman who has arrived into the spotlight, and I’m happy in American you can do that if you work hard, but her policies are alarming and she’s extremely uneducated as to why she’s constantly under attack by the media.” She added.

The Judge asked Candace what Nancy Pelosi is going to with Cortez. “Do you think Ocasio-Cortez is someone who can be reigned in by Nancy?”

“Oh absolutely. Here’s something you have to credit the left with: they never go against each other; they’re like zombies. They’re in lockstep no matter what the other person does. They never go after each other and attack one another in the media, so they’ll come together for the sake of trying to destroy Trump. They will be in lockstep and focused on trying to destroy Trump, trying to go after Republicans, and go after the GOP, I think what we are going to see here.” Candace concluded.

[Alexandria Ocasio-Cortez] is not being bullied because she is the youngest person in Congress. People are actually holding her to task because she knows absolutely nothing and she made it to Capitol Hill. – @RealCandaceO pic.twitter.com/DeWrwyv6zP