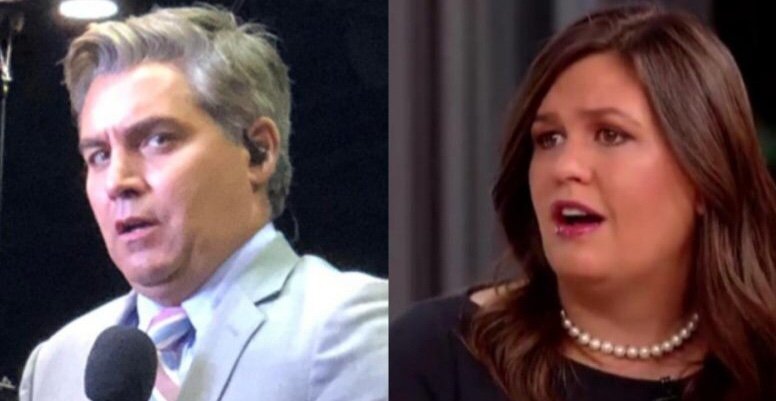 This comes after President Trump participated in a joint news conference in the Rose Garden on Tuesday with President Jair Bolsonaro of Brazil. (Video Below)

On Tuesday, President Trump and President Bolsonaro during the conference, discussed trade, space force, NATO membership and they slammed socialism. Afterwards, they took questions from the press.

The Daily Caller’s Saagar Enjeti asked about socialism and the Supreme Court during the news conference, and apparently that upset Jim Acosta.

Jim Acosta said of Enjeti, “The question was asked in a way that really tee’d it up like a game of tee-ball here in the Rose Garden. The President was just sort of served up a softball there when he was asked whether or not the Democrats are advancing a lot of socialist ideas.” (Video Below)

Enjeti explained, “I tried something novel. Rather than tell the President what was happening on a particular issue, I asked him to tell me.”

But, the ultimate tweet came from Sanders when she posted a clip exposing Acosta’s hypocrisy and added, “Dear Diary… #BestWeekEver” (Video Below)

The video Sanders posted on Twitter shows Acosta whining on CNN to the panel where they seemingly nodded their heads in agreeance with him like robots.

Then, the video go further to reveal the kind of “softball” questions Acosta asked of former President Obama. You cannot even make this up.

It seems that Acosta was irked President Trump didn’t choose to call on him to take a question from the fake news network.