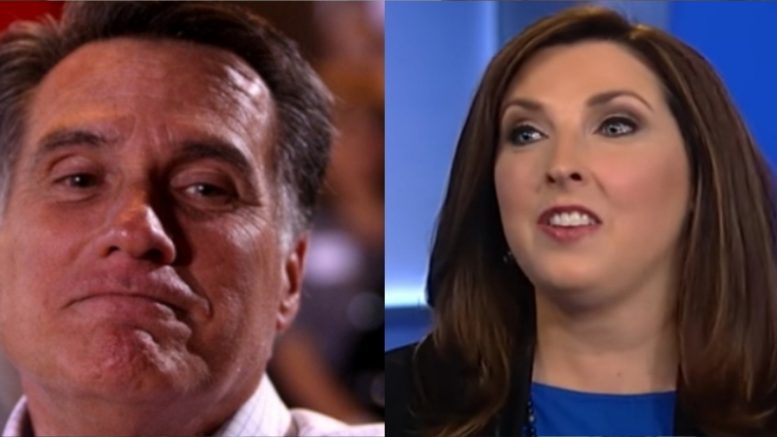 Mitt Romney's niece, Chairwoman for the RNC, slams her Uncle for anti-Trump op-ed in the Washington Post. Photo credit to The Freedom Times compilation with Humor Times, Fox Screen Shot.

Ronna McDaniel is the current Chairwoman for the RNC – the Republican National Committee for the GOP – Grand Old Party.  She has held that position since January of 2017 and is a staunch supporter of President Trump.

Mitt Romney (R-UT) wrote a back stabbing, never-Trump op-ed and the Washington Post printed it.

President Trump tweeted, “Here we go with Mitt Romney, but so fast! Question will be, is he a Flake? I hope not. Would much prefer that Mitt focus on Border Security and so many other things where he can be helpful. I won big, and he didn’t. He should be happy for all Republicans. Be a TEAM player & WIN!”

It’s interesting to note that while Mitt was running for Senator in Utah, President Trump endorsed him. And Romney won the seat. Additionally, it was discovered that Senator Flake (R-AZ) and McCain also endorsed Romney according to Ballotpedia.

It will be interesting to see how Romney votes. Will he vote with the Democrats and tow their narrative or stand with the Republicans? Time will tell. Although, in 2013, Romney “spoke out against  Republicans’ strategy in Congress to defund Obamacare.” (More below.)

Romney’s niece refers to her Uncle as a “freshman senator” and said his op-ed was “disappointing and unproductive.”

Ronna wrote, “POTUS is attacked and obstructed by the MSM media and Democrats 24/7.” Then she talked about her Uncles’s actions, “For an incoming Republican freshman senator to attack @realdonaldtrump as their first act feeds into what the Democrats and media want and is disappointing and unproductive.”

And she is not wrong. Romney attacked Donald Trump and his character in the disgraceful op-ed. It appears Romney might need to check himself in the mirror since he is the one showing low-character by not supporting the Republican President.

Let’s see how Mitt Romney votes in the Senate. Will he be an establishment RINO and vote the Democratic line? Or is he simply setting up to attempt to pull votes away from President Trump for the 2020 election? (More below.)