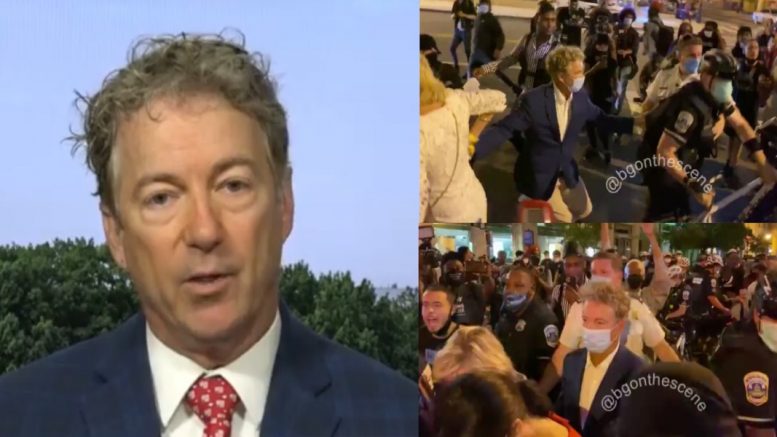 During a Friday interview on “Fox & Friends”, Senator Rand Paul (R-KY) told host Steve Doocy that he believes he would have been killed if not for the police being present when he and his wife left the White House Thursday night after President Trump’s acceptance speech at the Republican National Convention (RNC) Thursday night.

“It was horrific,” Senator Paul said, explaining that it took 45 minutes to get through all the mobs, and then he planned to get an Uber to get dropped off at the hotel, but the streets were blocked and no one would let them through.

He told the Fox News host that he had “whispered to the policemen– they know who I am, you have got to get reinforcement, it’s going to get worse”, adding that they waited for reinforcements, but they never came and the crowd grew.

“They were yelling threats, they were trying trying to push the police over to try and get to me. They were grabbing at us, and it got worse and worse and worse. Finally, we decided to make a move. I said, ‘We’ve got to move if there’s not gonna be reinforcements, we have to try to get to the hotel’, which was another block. They were shouting threats… to us, to kill us, to hurt us,” the Kentucky Senator said.

“These people were unhinged, but I can’t tell you, I’m not sure we would have made it,” he added. Continued Below

“You’ve seen the pictures of what they do to you. If the police are not there, if you defund the police, we become Portland. If America becomes Portland, what’s gonna happen is people are gonna be pummeled and kicked in the head and left senseless on the curb. That would’ve happened to us, I promise you had we not had the D.C. police to support us. We are thankful we have police and we gotta wake up,” Sen. Paul continued.

“We can’t have the whole country– we can’t have Joe Biden rule the country and have no police. … We can’t walk down the street in D.C. safely now. That’s how bad it is,” he expressed.

Senator Paul believes some of the mob was from out of town, saying, “I think we are gonna find out these people are hired and from out of town, specifically in our case. I believe there are gonna be people who are involved in the attack on us that actually were paid to come here– are not from Washington, D.C. and are sort of paid to be anarchists.” Continued Below

“This is disturbing because really if you’re inciting a riot that’s a crime. But if you’re paying someone to incite a riot, that person needs to go to jail as well. We can’t live this way. It’s getting worse and worse,” he said.

“I don’t hear Joe Biden or Kamala Harris saying one thing about the violence. This mob is their voters. This is the new Democrat Party. And if we don’t resist this, the United States is gonna become Portland, we’re gonna become Chicago. All of these failed cities, these Democrat’s have run, the president said it in his speech: ‘If we allow them to take over the White House, we are going to become Portland.’ The country will be on fire. We have to have law and order and we have to support the police. I can’t say that strong enough,” Sen. Paul stated.

“This is also not normal. There is something going on here. The FBI needs to be involved because this is an organized interstate racket. … My feeling is there is interstate criminal traffic being paid for across state lines, but you won’t know it unless you arrest them. Otherwise, you just think, ‘Oh, these are some normal hoodlums from a big city. I promise you, that at least some of the members and the people that attacked us were not from D.C., they flew here on a plane, they’ve all got fresh new clothes, and they were paid to be here,” he explained. Video Below

“It is a crime to do that, and it needs to be traced. The FBI needs to investigate, but the only way you can do it, is you have to arrest people. … They were inciting a riot and they would’ve killed us had the police not been there. They all need to be arrested, and I’m not saying forever, but they need to be arrested, questioned. They need to say ‘Where you are staying?’ And the bills need to be subpoenaed by a judge to say ‘Who paid for your bill? How did you get here on a plane and staying in fancy hotel, and yet, you’re acting like a criminal'”, Senator Paul said.

“Something’s going on here, and it’s much bigger than people think. But the bottom line is, we can’t let the Untied States become Portland, and that’s what my fear is that the United States is gonna be on fire if we have no police,” he added.

Rand Paul just got chased by a crowd back to his hotel, after leaving the White House from Trump’s Republican Party Nomination #DC #DCProtests pic.twitter.com/h1kPcZG1jh

Just got attacked by an angry mob of over 100, one block away from the White House. Thank you to @DCPoliceDept for literally saving our lives from a crazed mob.