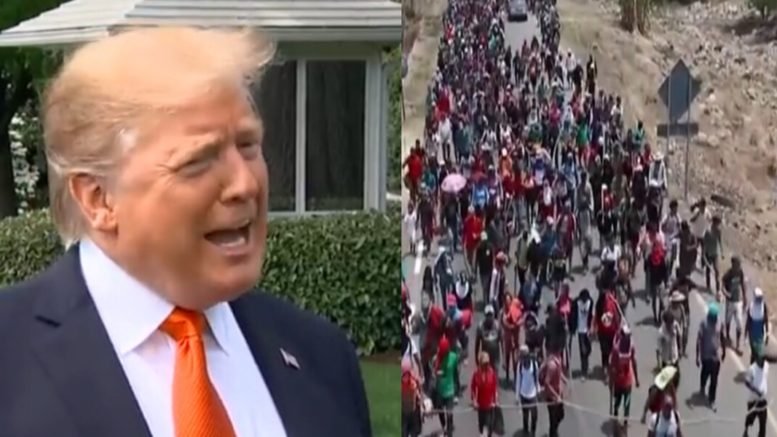 President Trump took to Twitter Wednesday morning where he dropped warnings to Mexico and Congress as another Caravan is headed to the U.S. southern border.

This also comes as the 9th Circut Court is hearing arguments about the Trump administration’s asylum policy for asylum seekers to “remain in Mexico.”

At the beginning of the month, a federal judge issued a preliminary injunction to stop the Trump administration’s policy of having some asylum seekers wait in Mexico while their case is under consideration.

District Judge Richard Seeborg wrote in his ruling that while it’s unclear how much risk asylum seekers are facing under the policy, “there is no real question that it includes the possibility of irreparable injury.”

Trump lambasted the judge’s decision writing on Twitter, “A 9th Circuit Judge just ruled that Mexico is too dangerous for migrants,” he wrote. “So unfair to the U.S. OUT OF CONTROL!”

However, a few days later, Trump cheered the 9th Circuit Court’s decision to temporarily permit the Trump administration to ship asylum-seekers to Mexico, halting a lower court’s ruling on the matter. “Finally, great news at the Border!” He wrote. (Continued Below)

The Trump administration requested the 9th Circuit Court of Appeals in San Francisco take action in response to an order from U.S. District Court Judge Richard Seeborg, which would have stopped the Department of Homeland Security from sending asylum-seekers to Mexico as they await their court hearings. As a result, the court will hear arguments from both parties — the Trump administration and civil groups, reported Washington Examiner.

The Ninth Circuit Court of Appeals is hearing arguments today on the administration policy.

President Trump also wrote on Twitter announcing that another Caravan is heading this way and warning that he will be sending “armed soldiers” to the border after Mexico’s Soldiers recently pulled guns on our National Guard Soldiers.

The Commander in Cheif wrote, “A very big Caravan of over 20,000 people started up through Mexico. It has been reduced in size by Mexico but is still coming. Mexico must apprehend the remainder or we will be forced to close that section of the Border & call up the Military. The Coyotes & Cartels have weapons!”

He continued with a warning, “Mexico’s Soldiers recently pulled guns on our National Guard Soldiers, probably as a diversionary tactic for drug smugglers on the Border. Better not happen again! We are now sending ARMED SOLDIERS to the Border. Mexico is not doing nearly enough in apprehending & returning!

He concluded by demanding that Congress start to act: “Can anyone comprehend what a GREAT job Border Patrol and Law Enforcement is doing on our Southern Border. So far this year they have APPREHENDED 418,000 plus illegal immigrants, way up from last year. Mexico is doing very little for us. DEMS IN CONGRESS MUST ACT NOW!” (Video Below)

(Related: Op-Ed: Schumer Told Trump To ‘Abandon The Wall’; History Doesn’t Forget What Chuck Use To Stand For)