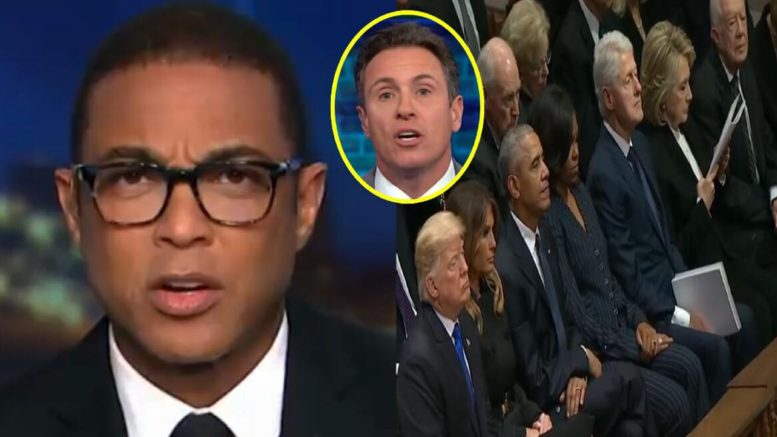 This came after the Trump’s attended George H.W. Bush’s funeral, and President Trump shook hands with the Obamas while Hillary Clinton didn’t offer him a glance. (Videos Below)

While on air Wednesday night, Don Lemon showed his true colors and proved why he isn’t a journalist.

“I’ve got to tell you, I’m just being honest, the Obamas are really classy folks because I don’t know if I could be,” Lemon said. “I don’t think I would’ve shake hands with him. I would just… no, couldn’t do it. I’m not that big of a person. I would hope that I would be, but I don’t… I can’t fake the funk, as they say. And I’m not saying that the Obamas did that.”

Lemon whined while asking why the Obamas should show respect for the Trumps when they don’t do the same. (Videos Below)

(Related Article: In The Middle Of The Night, TRUMP STRIKES BACK At LeBron & Lemon Issuing A DBL Dose Of Reality)

Next, Lemon demonstrated what he “would have done” at the H.W. Bush’s funeral with a member of the TV crew. When the staffer reached for Lemon’s hand, he refused. (Videos Below)

Lemon continued, “This is not about ideology. This is about the way someone conducts himself. If you constantly called me names and you were rude to me and you did petty little…. why should I have to show you respect at all?”

Muttering under his breath, Lemon said, “And you want me to shake your hand? S***! I’m just real. I tell you how it is. I’ll smile at you, but I don’t have to.”

Watch the two videos below:

How Don Lemon would have greeted Trump if he was Obama- full video:

Loser for sure, that attitude is why we have the issues we have today. So childish. Good for Chris! Come over to Fox Chris, leave that loser station CNN

Petty and small sums him up!

Dude, @donlemon is a petty little [email protected]%&#! Come on if you are at a funeral show some respect. Hey if the mob can be respectful at a funeral even if is only for show. Get over yourself you cheap pundit.

Whoever touches Don Lemons Hand should use Hand Sanitizer afterwards

#realpettyandsmall @donlemon be an adult, act mature…act..isn’t that what’s really going on with cnn? The Enquiry rag could be a runner up.#FakeNews