Avenatti gets hit in a divorce suit. Photo credit to The Freedom Times screen capture.

It’s difficult to believe the DNC and Avenatti thought he would be a great candidate for the Democratic party in the 2020 Presidential election. (MORE BELOW.)

Avenatti’s spouse filed for divorce, and in a settlement recently arranged, he is going to lose just about everything.

As reported by TMZ, he and “his estranged wife have an agreement in place for him to pay her child and spousal support, and it requires him to fork over a ton of his assets.”

He is going to lose it all to pay his bills!  (MORE BELOW.)

Avenatti loses his wheels and more.

Fox News reported, “The court filings in Orange County, Calif., as reported by TMZ, indicate a judge has ordered Avenatti to pay his wife Lisa Storie-Avenatti $162,295 per month in child and spousal support retroactive to Jan. 1, 2018. The combined total amounts to more than $1.9 million upfront.”

“In addition, the judge ordered Avenatti to fork over his assets for liquidation including five luxury wristwatches – some worth $50,000 – a Frank Gehry sculpture, several pricey works of art, and a 2017 Ferrari 488 GT Spider worth about $300,000, according to the report. The judge also mandated that Avenatti’s law firm, Avenatti & Associates, transfer its interest in a 2016 Honda private jet,” Fox News said.

Related Article: After Being Arrested, Woes Continue For Avenatti As His Law Firm Gets The Boot  (See photo below.) 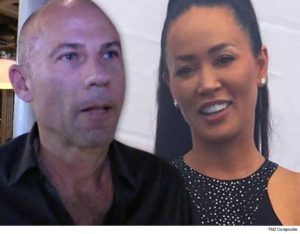